Crypto, The Volatility Hook, FOMO, and the Whole Nine Yards 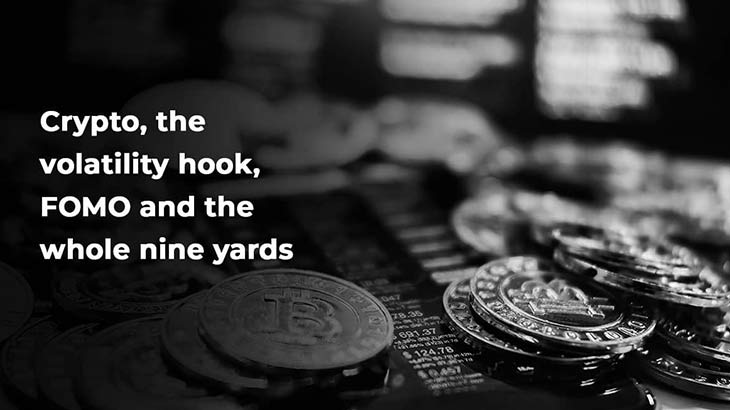 The democratization of the internet and access to world news has been a game-changer in how people choose to invest their money.

In India, physical forms of gold have traditionally been sought-after forms of investment with households collectively owning the biggest private stock of gold amounting to 25,000 tonnes. However, the downside to this form of investment is that it doesn’t generate new wealth and it costs money to keep it safe. The Indian stock markets are popular places to invest and trade today and the ability to trade online has added to the ease with which investors and traders alike operate these markets. It is important to note however, these aren’t the only ways in which individuals can invest or trade their funds.

Advances made in the world of technology combined with increased access to both smart devices and knowledge have allowed cryptocurrency to gain in popularity today. Cryptocurrency can be understood to be virtual currency accessible via digital platforms and which is protected by cryptography. This layer of security makes this currency almost impossible to forge or double spend. Key to their genetic make-up is that a number of cryptocurrencies are designed using blockchain technology which allows for information to be recorded and distributed without allowing for any edits to be made. Simply put, this technology makes use of varied forms of encryption to control the units of money generated. Encryption techniques are additionally used to verify any fund transfers that take place. Blockchain ultimately helps ensure that each transaction is carried out with integrity. What makes cryptocurrencies stand out is the fact that they are for the most part not issued by a central authority. The relevance of this lies in the fact that these forms of currency are then technically immune to any form of manipulation or intervention by the government.

Some of the cryptocurrencies currently dominating the market include but aren’t limited to Ethereum (ETH), Litecoin (LTC), Polkadot (DOT), and Bitcoin (BCH).

Why is Cryptocurrency so Volatile?

Cryptocurrencies have from day one been known for their volatile market conditions. Investors have been known to profit enormously from the upswings as well as having lost big when the market has faced downturns. The reasons for the volatile nature of cryptocurrency markets have been examined below.

The Power of Speculation – Cryptocurrency’s volatility is largely associated with the speculative nature of investors and traders some of whom are enticed by the possibility of making big wins based on guesses at the upturns of the market. Large Scale speculative bets increase the volatility of an already volatile market.

Knowledge Base of Traders – Unlike the stock market and real estate investments, vast swathes of prior knowledge aren’t required in order to make an investment in the cryptocurrency domain. Investors need only possess access to the internet and a small amount of money to spare. This very fact makes this market so appealing to traders with minimal or no experience. Those involved in institutionalized trading markets are more wary and cautious of the cryptocurrency market and view it as a risk to invest in. The fact that the average investor within this domain is therefore less fluent and well versed with market conditions takes a toll on the cryptocurrency markets. They are more susceptible to hype, uncertainty, doubt, fear, and blatant manipulation. Average traders within this domain are less likely to retain a sense of peace within adverse situations which experienced traders would be able to have control over.

Backed by Faith – The digital nature of cryptocurrency implies that it lacks any form of physical backing. Instead, its price is entirely determined by the forces of supply and demand. Since the supply of most cryptocurrencies is predetermined or predictable, their prices are governed by how much interest they have stirred and how many people want to purchase the currency. As a result, the value of the currency is dependent on the faith people instill within it. In the event that people lose faith in it, they can choose to sell their currency which can lower its value.

Miniscule Market Operation - Cryptocurrencies have yet to fully take over investors’ and traders’ priorities and interests. While the cryptocurrency market has recently topped $2 trillion, it is still ions behind the total valuations of the gold market which amount to $7.9 trillion, and the U.S. stock market which is 14 times its value amounting to a valuation of $28 trillion. As a comparatively smaller emerging market, smaller forces are capable of having stronger impacts on the price of the cryptocurrency.

Technology Used is being Perfected – Blockchain and associated technologies used to aid varied forms of cryptocurrency are still being honed to perfection. Problems range from blockchain scalability to network congestion and rising transaction costs.  That being said several advancements made to the technology have been received well.

The Role Media Plays – The media plays a major role in impacting cryptocurrency prices. Their stories pertaining to it can also add to the currency’s volatility. Added to this, several investors and traders involved with cryptocurrency may not due diligence about the news they receive which may not be from credible sources.

Each of these aforementioned factors enhances the volatility of the cryptocurrency markets which is known to move in irregular directions during irregular timeframes. It will take a long while before experts are able to determine how best to predict how this market operates.

Those eager to invest in cryptocurrency markets should be aware of the pitfalls associated with its volatility. Endorsements by celebrities have been known to sway the price of varied cryptocurrencies. Take for instance Dogecoin which has seen a rapid upsurge since being promoted by Elon Musk. That being said there is no predicting where these currencies will go following these endorsements. This means that hyped currency valuations can very well fall dramatically. Prior to investing large sums of money, individuals must consider their understanding of the prevailing crypto technology governing their choice of cryptocurrency. Moreover, they must examine market trends pertaining to the same and similar currencies and understand why they are so volatile prior to making significant investments.

Disclaimer: Angel One Limited does not endorse investment and trade in cryptocurrencies. This article is only for education and information purposes. Discuss with your investment advisor before making such risky calls.