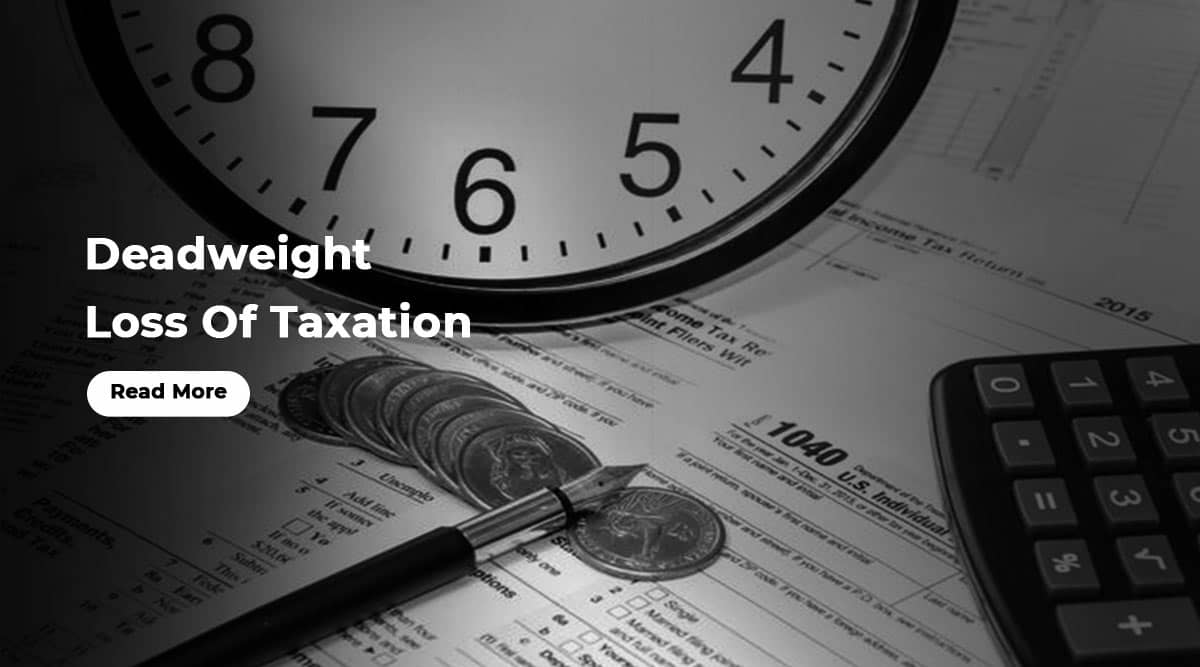 All you need to know about this economic term and why it is relevant to you as a direct or indirect (via mutual funds) stock market investor.

While most good citizens pay their taxes diligently, it is no secret that even the most diligent citizens are unhappy about having to part with a chunk of their hard-earned money. And while everyone can rant for hours/pages about how they wish they could pay less taxes, this taxation blog is about the considerations and calculations that investors need to put into play when a new tax is announced.

What is deadweight loss?

The main goal of taxation is to provide the government with revenue that it requires to perform its due services to the public, including development of infrastructure and public health and welfare programmes and so on. This works, for the most part. But things start to become tricky at the time when a new tax is introduced because you might say that it sort of throws a spanner into the works. The otherwise smooth functioning of demand and supply is affected and this can affect the overall pace and trajectory of economic growth. This interference in the rhythm of demand and supply is known as deadweight loss.

To understand deadweight loss’ meaning more fully, let us imagine what happens when a new tax is introduced. In fact, you might remember some of these typical economic responses from moments in your lifetime when you have witnessed a new tax being introduced.

A new tax creates a tense business environment and businesses become less likely to take risks. Small businesses and startups might be hindered in their launch and businesses of all manner might not follow through with expansion plans because of a resistance to risk in such an environment.

Buyers: People might cut back spending because of a lower amount of disposable income on account of funds diverted towards paying the new tax. Buyers might also lower their consumption of products  and services that have become more expensive because of the new tax.

Alternatively, they might even choose other products that have a lighter tax component. Business/ demand might also leave the country in the case of taxes that affect tourism and hospitality: people might simply choose to holiday in other countries, for example.

Taxpayers are also likely to spend time and money trying to find a way to reduce their tax burden; again this is money that could have been spent in a way that helped the economy thrive.

Government: The government might end up not actually earning the revenue that it sought to earn by levying the new tax, because of diverted/ lower demand and lower production. Besides this, the government also incurs costs to implement the tax, creating awareness, holding workshops and training, maintaining records and chasing tax evaders. In the end, the government might end up earning less than it spent, and the economy could well slow because of shrunken demand and supply.

Relevance of deadweight loss to investors:

The main point of investors having to wrap their heads around deadweight loss is that it has the capacity to impact your investments:

1. Deadweight loss might also be referred to as welfare loss.

2. Deadweight loss can also emerge from inflation, where

3. The whole concept of deadweight loss of taxation is credited to an economist known as Alfred Marshall who theorized that the ongoing demand and supply tussle, actually had two more threads, production and cost, and that the four met at an intersection. Any interference in any of the four, Marshall said, was likely to affect demand and supply.

4. If the government were to use bonds to meet its revenue needs instead of adding to taxes, it would not make much of a difference in the long run because eventually taxes would need to be increased for the government to pay back bondholders (with interest to add to everything).

Conclusion: A new tax is more than just a tax burden for you as a citizen/ taxpayer. It can seriously impact your investments. Always have a thorough look at how your investments may be impacted by a new tax and rejig or rebalance as required.