From A Small Lender To Asia's Richest Banker: How Uday Kotak Changed His Fate 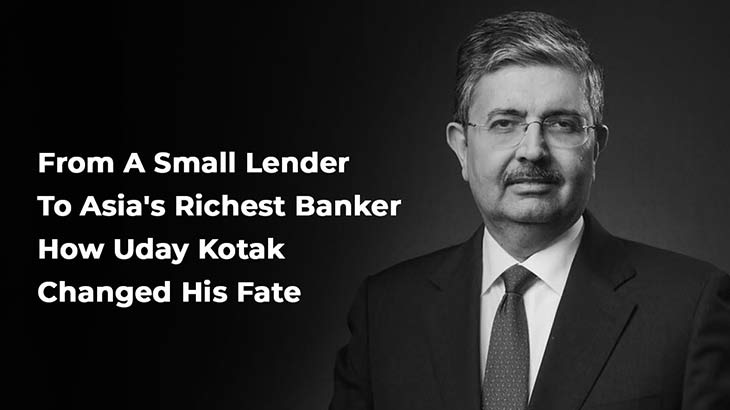 Starting with a small lending firm that offered affordable loans to small companies, Uday Kotak turned his business into a successful bank, which is currently the second-largest private bank in India in terms of market capitalisation.

His wealth grew four times in the last ten years. Currently, with a net worth of almost USD 15.3 billion, he is the wealthiest banker in India. Coming from a non-banking background it is a big feat to achieve.

How He Got Started

He comes from an upper-middle-class Gujarati family that was into the cotton business. He graduated from Mumbai University and pursued an MBA from the prestigious Jamnalal Bajaj Institute of Management Studies. Although he got a job offer from a multinational company, his father motivated him to start something of his own. He started with a small lending business that provided affordable loans to companies.

In 1985, when India's economy was still closed, he started a one-man financing company. At that time, loans were expensive, but on the other hand, depositors received only a fraction as deposit rates were low. He said in an interview, "I was shocked to find that triple-A-rated borrowers would get money at 17% when families I knew would only get 6% interest on their money."

It was a beginning of a revolution, which later became the first NBFC to receive a full-fledged banking license from the RBI.

The sixty-years-old banker made Kotak Mahindra bank a success single-handedly. It is his able leadership and management skills that made him stood out among his contemporaries.

Uday Kotak is the wealthiest banker in Asia and the sixth richest person in India, as per Harun Rich's list in 2019. His net worth grew 268 percent from USD 3 billion to USD 11.8 billion in 2019, primarily due to the rising value of the bank's share price in the market.

Uday Kotak, being the promoter of the bank, holds a 30 percent stake in the bank. RBI has asked him to reduce his holding size to 15 percent by the end of FY20 – a decision which he has been fighting for the last ten years. He turned Kotak Mahindra into India's second most-valued bank by market capitalisation.

He attributes his success to the middle-class value

He claimed that his business values came from the middle-class values instilled in him and common sense. He emphasised that going forward, banks should focus on three values – prudence, simplicity, and humility.

Prudence: He believes in the philosophy that 'return of capital is more important than return on capital.' His prudence paid off when Kotak became the first NBFC to become a full-fledged bank in 2003. Between 2009 and 2019, Kotak Mahindra Bank grew at a CAGR of 35 percent, outperforming S&P BSE Sensex, which generated a return of 16 percent during the same period.

Currently, the bank has a market capitalisation worth USD 48 billion and a price-to-book value of 6.2, higher than most banks.

Simplicity: According to Kotak, banks must design products that are easy for customers to understand. It is essential to ensure trust among customers.

Humility: He believes that bankers need humility since they are managing people's money.

A digital-first approach benefited Kotak amid the COVID-19 outbreak

Kotak has proved that it is vital to think ahead of time; envision the future before your competitors. Even before digital-banking became the norm amid the pandemic, Kotak Mahindra bank adopted digital innovations to simplify banking services. For instance, in May 2020, the bank became the first bank to implement video KYC for new customers. It facilitated a prospective customer to complete the account opening process from their smartphone in just ten minutes.

These are a few examples of the bank's digital-first approach.

You must take an opportunity when it is presented to you.

In 2014, RBI asked Kotak to lower his stakeholding in the bank as per RBI governance rule from 30 percent to 15 percent. But Kotak decided to add more muscle instead to his business by acquiring ING Vysya for USD 2.4 billion, which nearly doubled the bank's wealth and propelled share values.

He is a prudent leader

Speaking about Uday Kotak, Mahindra supremo Anand Mahindra said, "As far as I'm concerned, becoming the world's richest banker is only a proxy for Uday being one of the world's smartest bankers."

It is true since Kotak bank's shares excelled in the market and outperformed its peers. Even before the pandemic hit the market, Kotak managed its asset quality well compared to the others. He reduced lending to risker segments and small sector financing. Kotak was the first to raise capital from the market to fortify the bank's financials when borrowers' repayment abilities started to deplete due to the pandemic. He understood the depth of the crisis ahead of his peers, which allowed the bank to gain customers' and investors' trust and stay on the path of sustainable growth. His strategy paid off because the share prices of Kotak bank went up by 17 percent, the highest amongst his peers.

When the shadow-banking crisis started to brew in the Indian economy in 2015, Kotak managed to stay above the level with a strong balance sheet and low bad-loan ratio. Although the bank's bad-loan amount increased in 2020, it is still the second-lowest amongst its competitors.

Strong vision, ability to adapt, deep understanding of the market, and unassailable corporate governance are the factors that helped Uday Kotak to write a success story from being a small lender to become the most successful private banker in India.

Speaking again of him, Anand Mahindra said, "More importantly, he's understood that what makes a bank sustainable and durable is not just smart strategies but unassailable governance."

Uday Kotak has been at the helm of Kotak Mahindra Bank since its beginning. He has steadily grown in ranks and maintained a tight fist corporate governance, attributing to the bank's success. During his time, he practised strict underwriting policies of reduced lending to potentially risky segments and focusing more on mortgage-baked lending that helped the bank maintain an unblemished balance sheet. The question is now, what would happen when the sixty-year-old banker hangs up his boots.

Recently, RBI has reappointed him for another three years as MD and CEO of the Kotak Mahindra Bank.