Indiamart’s QIP: behind the scenes 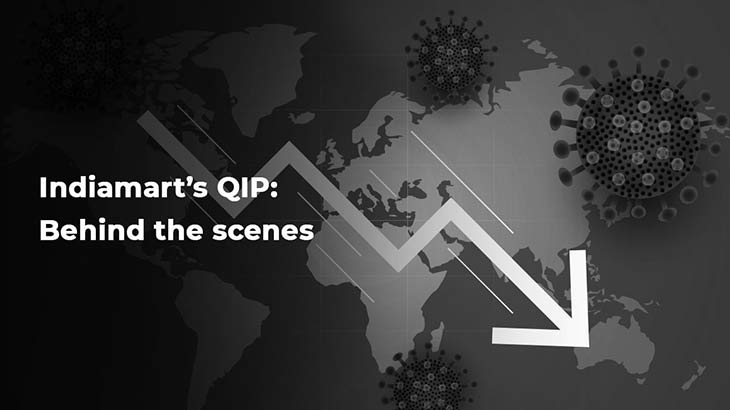 Last year, when the pandemic had hit businesses hard across the globe, most people resorted to the internet to keep their businesses afloat.

You must have heard tales of FAANG (Facebook, Amazon, Apple, Netflix and Google) stocks soaring to new heights over the past year - right when most businesses were suffering to make even a single profitable sale. The Internet always demonstrated incredible potential to increase business efficiency and reach, and how it makes processes faster is a no brainer. Amazon became profitable not because it was selling things online, but because it was filling a crucial gap in customer demand - both by making things available beyond their native markets, and providing businesses with ready-to-deploy internet infrastructure capabilities with Amazon Web Services (AWS).

However, the impeccable potential of the internet is not limited to buyers like you and me. Imagine that you are running a fleet of vehicles on lease, and you now want to place GPS sensors on your trucks. Or, imagine that you run a PVC pipe production business, and the supplier that used to ship PVCs to your factory at a profitable rate has run out of labour during COVID, and now your business is affected too, as a result. What will you, as a businessman do in such a situation? This is where IndiaMART comes in.

IndiaMART IndiaMESH is basically an online B2B marketplace in India - it serves both the buyer side and the seller side in the B2B landscape. Now what do we mean by this? And why are we talking about IndiaMART in the first place? Because this company, that runs India’s biggest online B2B marketplace, has issued a QIP - or a Qualified Institutional Placement, that will allow it to raise further capital for expanding its business. This is what the hype is all about. We will try to understand what this QIP means for IndiaMART’s stock prices.

Yes, so we were talking about IndiaMART serving both the buyer and the seller side of the B2B landscape. Remember when we mentioned your PVC supplier stopped supplying you the PVC to run your business? If you were running your business in India, IndiaMART is where you would go to find a new PVC supplier. Now, if you were supplying your manufactured PVC pipes to other factories which used the PVC pipes to manufacture other stuff, it's likely that these businesses went through a blackout too, during COVID. Now you need to sell your manufactured pipes to other businesses. Again, you would go to IndiaMART to sell your manufactured equipment. This is what we meant by IndiaMART serving both sides of the B2B equation.

When the pandemic struck, businesses were desperate to both find new suppliers that could keep their businesses afloat, and new buyers that could keep their balance sheets out of deep water. IndiaMART came to the rescue, and according to a news report, the traffic to IndiaMART’s website had shot up by 38%, and 56% more businesses were making inquiries. And for the right reasons. B2B or B2C, buying and selling is likely to take place off the internet in the foreseeable future, unless a new technology makes its way into our lives, and makes it simpler to run businesses. Some of the biggest consulting firms agree on the centrality of doing business through the internet.

Now we understand that the future of online B2B business looks solid. So why is IndiaMART seeking to raise capital through a QIP? QIPs, mind you, shift the regulator’s responsibility more towards the buyer’s side than the company making the offer. Which means that only qualified institutional buyers (QIB) are able to buy from QIPs. According to another news report, some of the big names like Edelweiss, ICICI securities and Jeffries stand behind IndiaMART’s QIP. No wonder, IndiaMART’s stock prices shot up by 7% on the day on which the QIP started - that is, 17th February.

So what’s in it for these QIBs, and why is IndiaMART raising more capital if the future already looks bullish for this industry, and when the business is already doing well? Basically, IndiaMART wants to explore alternate revenue streams by raising this capital. For the QIBs, the offer is being made at almost a 5% discount on the floor price of 9065.61.

So will this QIP help IndiaMART make it big in the Indian stock market, just like the FAANG rally? Well, apart from the prices surging by 7% post issue, the stock multiplied almost 5.5 times in price between the last March (~1740) and this February. Moreover, the prices continue to float well above 8000 at the time of writing. IndiaMART fills a critical gap in the marketplace, and since most of India’s B2B SMEs lack digital maturity like their American counterparts, IndiaMART helps them leverage the internet economy and allows them to participate in the marketplace on a bigger scale.

While no one can really say as to where the prices are headed, the future looks bullish for the industry and SMEs are still flocking to the internet, because the benefits of going online to sell your products and to find new suppliers are enormous compared to the in-person approach to doing the same. In fact, McKinsey says that COVID had changed B2B sales forever, and the potential of going digital comes from the demand side too - most B2B buyers want remote, online interactions. IndiaMART helps SMEs take the first step in this direction, so its value proposition remains solid. The QIP will help give the business a solid push, given that the company explores the B2B marketplace in the larger scheme of things. Adding collaborative capabilities to its platform might be a solid move in this direction.

To learn more about what’s behind the headlines of the stock market and India’s economy, do not forget to visit www.angelbroking.com.