Is it Possible to Identify Moat Stocks? Let's Find Out 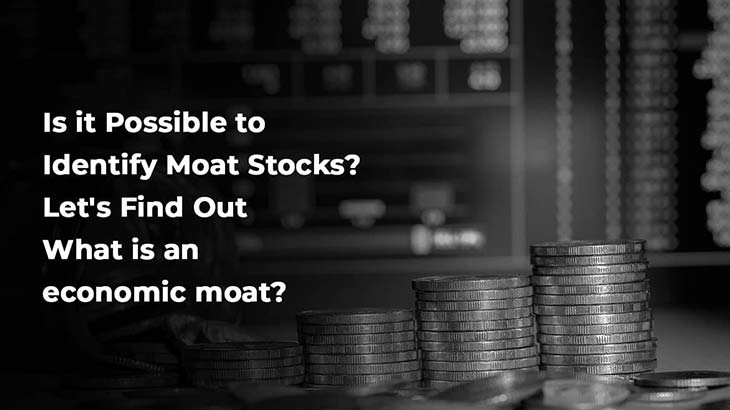 The impregnability of a fortress is defined by the effectiveness of its battlements, moats, barbican, towers, turrets and portcullis.

What is an economic moat?

The impregnability of a fortress is defined by the effectiveness of its battlements, moats, barbican, towers, turrets and portcullis. The metaphor of a fortress, therefore, is befitting for a company that can successfully fortify itself against competition and thrive in the market. The moat, particularly, has been used as a symbol for the competitive advantage a company has over its industry peers. This advantage helps the company maintain long-term profits and guard its market share.

This competitive advantage enables a company to manufacture goods or services that are offered by other players in the industry as well while outperforming these players in terms of the profits it generates. Such an advantage could be afforded by low costs of production, economies of scale, or other factors. Investors who have an intensive knowledge of these factors can identify and invest in companies that are said to have a "wide moat", and create long-term shareholder value. In ordinary parlance, stocks of such firms are simply called "moat stocks".

But can these moats be breached in the long run? Yes. The deeply competitive market will create conditions in which other firms will begin to duplicate the methods that have so far provided a company with its competitive edge. As the company will continue to generate more profits, competitors will be incentivised to copy these models, or, build moats of their own that lead to more efficient operations and higher profits.

The story of moat stocks

The concept of moat stocks was popularised by ace investor Warren Buffet. “The most important thing [is] trying to find a business with a wide and long-lasting moat around it … protecting a terrific economic castle with an honest lord in charge of the castle,” Buffett had said 1995.

According to Buffett, a company has successfully built a financial moat if it is a low-cost producer, has a technological advantage, or any other reason under that sun that gives it an edge over the competition. So, yes, investors can identify moat stocks.

After identifying such a company, the next step, in Buffett's opinion, would be to understand why this particular advantage should remain intact. "How much do they depend on the genius of the lord in the castle?" Buffett has said. This is reflective of the final step in the process - understanding the capability of the manager. Once the investor is satisfied with these, they should attempt to buy shares at a lower valuation.

Although this three-step process was detailed by Buffett in 1995, it has more or less remained intact through the years. Some companies are known for having a wide moat, such as Amazon and Walmart in the US and ICICI Lombard, Titan and Biocon in India. Identifying others, meanwhile, requires intensive knowledge of the company and the market.

How can companies create economic moats?

Cost: A good businessman knows how to balance quality with cost. If a producer can manufacture quality items with low costs of production, they are at a significant advantage vis-a-vis their profits margins compared to their competitors. This factor bars the entry to new players in the industry and allows the producer to enjoy a large market share.

Size: A large company can dominate the market due to its sheer size. Big producers are at an advantage because they have attained economies of scale, which enables the production of goods and services on a large scale with lower costs of advertising, financing and others. This enables companies to control a large share in the market. Moreover, such a large company can dictate higher costs of switching for suppliers and customers, should they choose to engage with a rival.

Brand value and other intangibles: Certain brands become status symbols for customers, or come with a promise of superior quality. A company that has made the efforts to cultivate a good brand name fares better than its competitors. Other than brand name recognition, intangible factors such as government licenses and patents play a big role in defining the stocks of a company as moat shares.

Soft moats: Factors such as good management and a unique work culture may be responsible for driving up the competitive edge that the company has. These may be difficult to identify or even describe, but contribute to long-term profitability.

How to identify moat stocks

Performance during bad economic times: If a company performs well even when the economy as a whole is struggling, the business is robust. The resilience of a firm shines through in times of such economic dip.

Cash on hand: A company's cash on hand, which it may keep instead of paying out as dividends or reinvesting, can be a good indicator of its financial health. While investors appreciate being paid dividends, having cash on hand can help the company soften the blow in case of any eventuality.

Intellectual Property: Intellectual property that has been patented by the company helps it create a product that is like no other. Competitors cannot enter the fray since customers have no choice but to use this patented product. Products that are one of a kind are also able to successfully shunt out the competition because their uniqueness serves as a moat around their businesses.

Moats begin to appear only when a company has been operational for a long time. The factors that make them different may not be visible to investors, or even the management, at the beginning. These patterns emerge only when the performance of the company is judged in hindsight. Investors scramble to bet their money on growing companies that have created a sustainable, long-term moat.