From Investor to Entrepreneur: Journey of RK Damani 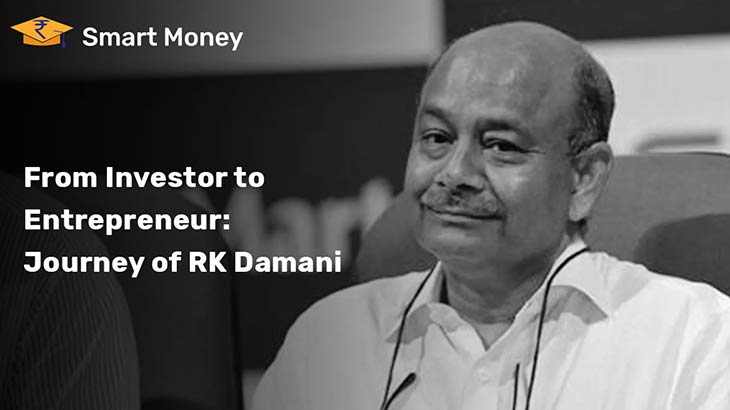 From an investor to an entrepreneur, RK Damani's success story inspires millions. He is one of the few billionaires who have made their way to success through hard work.

A former investor turned successful business, Radhakrishnan Damani's success story is inspiring to millions. He is one of the few billionaires who paved their way to success through sheer hard work, starting right at the bottom to work their way up. He is currently the seventh richest man in India with net-worth of USD 18.9 billion. Let's look at the life's story of India's retail king, the founder of D-mart, Radhakrishnan Damani.

His Background Played An Important Role In Shaping Him

RK Damani was born to a Marwari family, one of the influential business communities of India. He started working at an early age as a stockbroker after dropping out of college. At the initial days, he worked as a stockbroker in Dalal Street. But he soon started to invest in stocks once he realised that to make real money, he must become an investor himself. He began to make a profit from his trading techniques and investments in multi-bagger stocks.

He Transitioned From Investor To Entrepreneur

During his time, he was one of the ace investors who also happened to mentor Rakesh Jhunjhunwala. He was one of the most successful value investors of India with a knack to buy cheap stocks with the potential to generate value in the long run. He held those stocks long enough to earn profit from those. RK Damani's success streak in the stock market lasted from the 1980s to 2000, but he suddenly quit the Dalal Street and begun his journey as an entrepreneur.

He opened the first store of D-mart in Powai in 2002. Currently, D-mart is a more than 214 stores strong retail chain and the 18th more valuable company in the country. In 2017, D-mart made the public debut in the stock market with the launch of IPO.

The D-mart Model Of Business

D-mart has risen to success comparatively in a short time. They focus on offering convenient shopping experience to customers and value for money. D-mart focuses on catering to the middle-income group, and hence, their stores are located close to residential areas. Also, they own their stores, which help them to stay debt-light.

Their business model stands on three pillars – customer, vendors, and employees. D-mart believes in the principle of 'Buy it low, stack it high, and sell it cheap.' D-mart offers a price that is always 6-8 percent lower than its competitors, which helped them command a larger market share. With stores located mostly in suburbs and tire-II and III cities. It allows them to keep their operational expenses moderate.

In 2017, D-mart shares got listed in the BSE at 102.14 percent premium, which took its market capitalisation value to Rs 39,400 crores, more than the combined values of its close competitors Future Retails and Aditya Birla Fashion.

Lessons To Learn From The Life Of RK Damani

The credit of D-mart's success must go to Damani. He followed a unique business model that focused on serving end customers, offering value for money.

RK Damani believed in value investing. Even as an investor, he focused on buying cheap stocks with high potential to generate profit in the long run. So when he turned entrepreneur, he maintained the same approach. He never leases but buys the property where he wants to open the store. In the long run, it helps D-mart save big on rental outgo. As a result, D-mart might have been expanding slowly, but it has attained profitability faster than its rivals.

Damani didn't hurry to expand. It gave him better control over the supply chain.  Keeping it low scale helped Damani to remain in the good books of vendors and focus on profitability. D-mart has earned profit each year of its existence of nearly two decades.

Damani always pays his vendors upfront, where most of his competitor brands buy from the suppliers at 30-40 days credit, the industry norms. Usually, his suppliers receive a payment within 2-3 days.  It helped him build a personal relationship with his suppliers and vendors and stay in their good book. The store never goes out of stocks.

As An Investor, He Ignored Herd Sentiment

When he was an investor in Dalal Street, he initially followed popular investment strategies. He accepted that the started to make a profit when he ditched herd sentiment and followed his strategy.   He started focusing on finding stocks with long term profit potential.

He continued to follow the same strategy as he turned investor. Unlike his rivals, he expanded slowly, and his stores sell only a few brands. Damani never opened stores inside malls, which helped him save big and offer products at a cheaper rate.

Despite being a successful retail chain, D-mart largely concentrated in the western part of the country. The reason behind Damani's reliance on his successful relationship with local vendors and suppliers. His low key operational method has helped him to remain profitable.  Since starting in 2002, D-mart hasn't closed a single store.

He follows a simple business principle to supply FMCG goods to consumers at a lower price., without investing his energy in fancy décor and location. Customers come to D-mart for the simple purpose of buying items at low price.

When it comes to counting the names of successful personalities of India, no one can miss the name of RK Damani. Though he maintains a really low profile, his rise as a successful entrepreneur is quite phenomenal. He is one of the few self-made billionaires who started at nothing but made it big with hard work, focus, and vision.
RK Damani's life story tells us the importance of identifying value early and investing in keeping the long-term goal in sight.