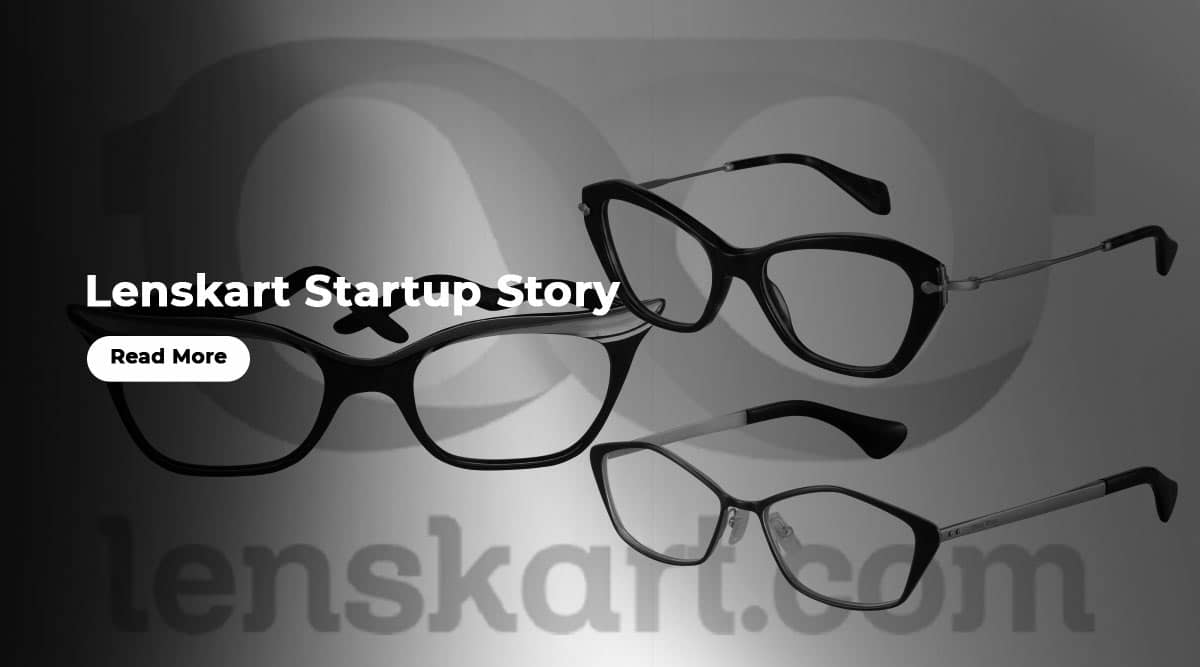 This article uncovers the early days of Lenskart and discusses how it gained popularity and grew over a relatively short period of time.

This Indian start-up specializes in optical prescription eyewear that it provides to the masses via its eCommerce marketplace wherein customers can choose from a wide range of goggles, frames, BLU glasses and prescription powered glasses. In addition to its online presence, Lenskart has established a number of physical retail stores across the country as well. As of December 2021, these collectively amount to 80. Each month, this eyewear chain produces over 300,000 glasses. A factory located in Zhengzhou, China is responsible for producing close to 20 percent of its glasses. Also called India’s unicorn prescription eyewear company, this article seeks to walk you through Lenskart’s start-up story.

Understanding the Mechanisms of Lenskart

Customers have the option to order classic as well as trendy lenses and eyeglasses online as well as at the Lenskart retail store which is what makes the company stand out in contrast to other players operating within the same industry. This company boasts of a “home eye checkup” which is the first-of-its kind. With the aid of specialized robots, Lenskart is able to deliver glasses that have an accuracy level amounting to 3 decimal places.

With over 5000 varied models of eyewear to choose from along with a two-week replacement guarantee, Lenskart manufactures everything pertaining to the eyewear industry which may range from contact lenses and sunglasses to reading glasses. Owing to the fact that this start-up has been able to consistently deliver high quality products at reasonable prices, it has gained tons of success.

Exploring the Brains Behind Lenskart

Peyush Bansal, Sumeet Kapahi and Amit Chaudhary serve as the founders of this company. Mr. Bansal happens to be the CEO and founder of Lenskart’s parent company - Valyoo Technologies. His business savvy was evident from an early age as Valyoo Technologies was founded while he was pursuing his post graduate degree at IIM in Bangalore. This parent company was created with the desire to add value to the lives of the customers it serves. When he launched Lenskart in 2010, it originally only sold contact lenses but by March 2011 its offerings expanded and began to include sunglasses.

This company uses an inventory-oriented business model that uses a B2C concept and employs in-house designers and stylists to stay abreast of eyewear trends which are then shared with manufacturers. By having the entire supply chain fall under its belt, Lenskart is able to limit the costs it must bear.

It has utilized a franchise model in order to secure offline stores such that it can cater to the masses. With a physical presence in over 30 cities, Lenskart has expanded its presence to include metropolitan as well as non-metropolitan areas.

Lenskart has been able to gain access to significant funding over the years with the company securing USD 220 million in its most recent funding round on July 19, 2021 which was led by Temasek Holdings and Alpha Wave Global. As of December 22, 2021, the company has raised close to USD 74 million in funding in total. Prominent investors in the company include but aren’t limited to SoftBank Vision Fund, Kohlberg Kravis Roberts and Unilazer Ventures.

It caters to the needs of over 100,000 customers each month

Lenskart’s Vision for the Future

This company’s vision focuses on creating a low-cost franchise model such that it can better cater to the country’s masses. The Lenskart Lite model has in fact been developed to do just this such that its offerings are available in tier 3 and tier 4 cities and that their presence is more prominent in tier 2 cities. The primary aim of the company is to bridge the gap that exists between lenses that have and haven’t been selected and seeks to do this by planning to open over 500 stores across the country in the next two years.

The Lenskart story is worth noting as it has seen its revenue grow in leaps and bounds over the years (i.e., its revenue grew by 56 per cent in the time between FY 18 and FY 19). With the massive amount it has acquired via its funding initiatives it is likely that it will experience major growth in the future.