PVR - a comeback on the cards? 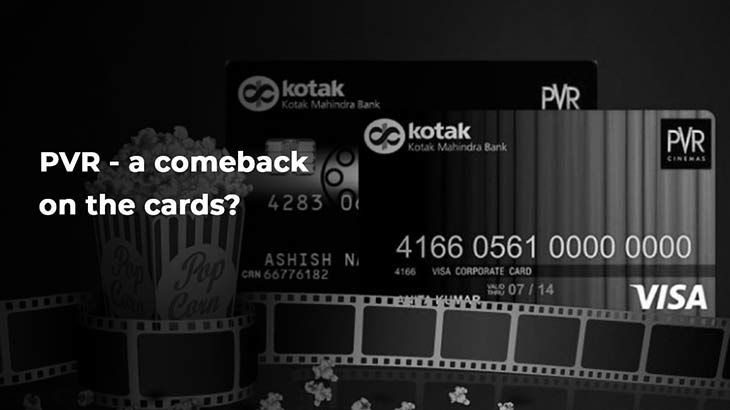 Who doesn’t like to watch movies. But when the COVID pandemic first hit the Indian subcontinent, investors began to withdraw from their investments - and this is nothing new, right?

Despite seeing the same lessons, markets continue responding the same way. All market crashes reek fear, and the skepticism in equity declines once again - only for a short lived period. Speaking from that perspective, the pandemic crash wasn’t even a proper market crash.

While a number of companies continued their bullish journey amidst a full-blown pandemic, entertainment and F&B stocks suffered drastically, and not without a reason - you, as a retail investor are unlikely to stay invested in a company that screens movies in public, when the government is issuing directives to stay at home and isolate from your friends until you hear from them next. PVR Limited, being one of the biggest film entertainment companies in India, undoubtedly suffered this fate - it’s price almost halved from a 2000+ level in late February 2020, and more than halved over the next couple of months.

So why do we care? This is why: PVR is one of the oldest entertainment names in India. Tracing its roots to Priya Exhibitors Pvt Ltd. of Vasant Kunj, New Delhi, and Village Roadshows Limited. After going in public in 2006, PVR has shown a strong track record. Between the financial crisis of 2008 and 2012, PVR’s stock prices more than tripled. But if we look at the price levels after recovery from the 2008 crisis, PVR’s shareholders multiplied their investment by over 23x in an 11-year period. That does sound impressive. And more importantly, Indians take their films seriously - so why shouldn’t shareholders take their take on PVR seriously?

After the pandemic of 2020, PVR showed a relaxed recovery, climbing steadily from Rs. 732 in May 2020 to 1500+ at the onset of 2021 - with a few readjustments squeezed in between. But the pandemic has had some lasting effects too - for example, many people are taking up remote work, and similarly, many are watching movies with their friends online - what has been called online watch parties with friends. And hey, they are fun too! Does PVR stand a chance to reclaim its glorious history in the Indian stock market? We believe it might.

While lockdowns might have shaken up our entertainment habits temporarily, India’s 1.3 billion strong population is almost as heavily rooted in Bollywood as in Cricket - and fintech successes like Cred have shown this through their massively successful campaigns that appealed to the masses through their favourite bollywood icons and cricket stars. The pandemic might have us watching movies while staying curled up in our blankets, or on TV screens at home, but Bollywood's history suggests that entertainment will pick up as we move away from the fear of infection after the pandemic. With vaccines making inroads into the subcontinent, people will hit the streets soon, and movies in theatres will once again be back on our flashcards for our outings with friends.

In fact, PVR’s CEO Kamal Gianchandani remarked that they hope to see full recovery in volume to the pre-pandemic levels by the end of FY 2021-22. In addition, a number of Indian states have already started allowing cinemas to operate on their full capacities. At the same time, a number of big-budget to-be blockbusters have been held from release as a result of delays in production during the pandemic. In 2021, the content pipeline is already crowded with some big names like Sooryavanshi and 83, and a number of franchises from Hollywood will also make a comeback this year, after staying on the snooze mode for over a year.

PVR stands unmoved from the pandemic slowdown, and has already issued a QIP to raise 800 crores at a floor price of Rs. ~1494 per share, which is merely a percentage higher than the January 27 close. The board of directors of PVR Limited had approved this move in late December, through a special resolution. PVR’s CEO Mr. Gianchandani also added that there is a pent up demand for entertainment that is waiting to be released after a long period of social isolation and distancing. And this is what will unlock a strong recovery in terms of occupancy levels in the Cinemas according to Mr. Gianchandani.

At the same time, some analysts have also predicted a steady and slow comeback for PVR. THe reason for this is an increasingly reducing entry barrier on OTT platforms like Amazon Prime and Netflix, which have released some big titles over the last year. However, PVR’s CEO remains unmoved by this shift - he believes that OTT and movie theatres will continue to coexist, and create a feedback loop of demand. Post QIP issue, some analysts have recommended to watch out for a target price of around Rs. 1620, while others are maintaining their neutral signals on PVR Limited.

So where do we go from here? While the argument for a strong content lineup does make sense, a lot will depend on the efficacy of the vaccine supply chain, and how fast people are comfortable to sit in the theatres, without panicking from overhearing a sneeze or a cough in the middle of their movies. Most have been slow, skeptical and careful to leave their homes, and while the demand for movies in theaters might catch up fast, clocking the same levels of price and growth as in FY 2019-20 is likely to take some time, even for an entertainment giant like PVR. Looking for more on hot stocks in the Indian markets? Then log on to www.angelbroking.com and keep the learning going!