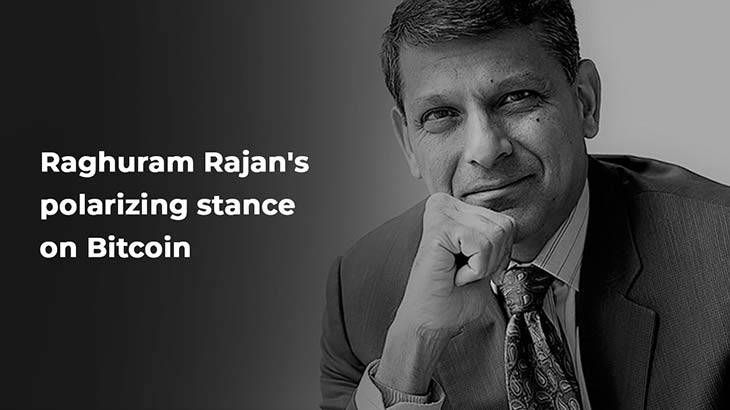 Bitcoin has been in news ever since its inception around the global financial crisis of 2008, but this year, bitcoin hasn’t only been in news.

It’s rising, and people are flocking to cryptocurrency exchanges to make some profits in a dizzying rally that seems to have no end in sight this time around. Last year, bitcoin crashed to $10,000, and ended at $40,000 towards December 2020. In the process many retail investors also jumped the ship to make money with other altcoins in the blockchain universe. However, Raghuram Rajan, India’s mastermind economist who accurately predicted the 2008 financial crisis is neither impressed by bitcoin, nor considers this bitcoin rally a growth trajectory. So what is this top economist’s take on Bitcoin?

Before that, let’s take a quick look at the Bitcoin economy and its role in the cryptocurrency ecosystem. Bitcoin, or any other cryptocurrency, for that matter, is essentially a digital medium of exchanging value. Intrinsically, if you own a bitcoin, you do not have any object, or a representation of an object in the real world. However, you can sell your bitcoin to someone else and recover dollars or rupees in return for it. This is where the trouble with bitcoin kicks in.

How many dollars a bitcoin will give you now, and a year later can differ significantly. This is because the price of bitcoin relative to the comparatively stable real-world currencies fluctuates a lot. And by that, we do mean, A LOT. So much so that some people who had bought ten bitcoins in 2009 for five hundred bucks and held them until 2017 - or last year, would be millionaires by now. And there are people like that - most notable are the Winklevoss twins, who came to be known as bitcoin billionaires on the internet. So why did bitcoin become so expensive in the first place, and why is Raghuram Rajan unimpressed with it?

When bitcoins were circulated, they were created in a fixed number. There will only be a few million bitcoins ever, and the last one will be minted around 2140. Yes, bitcoins are mined - just like gold, and this is the reason why some economists have equated bitcoin to gold. In fact, some believe that bitcoin is the 21st century equivalent of gold - only except that you can access it from anywhere, and redeem its value whenever you want to. Mining bitcoin has been becoming more and more expensive over time - because to mine a few bitcoins, you have to solve extremely difficult mathematical problems that require gigantic amounts of computing power. Bitcoin mining is so computationally and electrically expensive, that mining bitcoins leads to a notable carbon footprint across the globe.

Last year, a citibank analyst had predicted that bitcoin will cross a hundred thousand dollars mark in 2021, and many other cryptocurrency enthusiasts have forecasted much bigger numbers. But Raghuram Rajan believes that bitcoin’s current rally is an accurate example of a bubble. According to him, Tesla Inc., which is traded on S&P 500, is also priced much higher than its real value, while rivals like Toyota and Ford are trading much below the real economic output of a company like Tesla. So if Bitcoin’s rally is a bubble, where does it’s value come from?

Earlier this year, Elon Musk’s automotive company Tesla announced that it owned over 1.5 billion dollars worth of bitcoin - following which, Bitcoin broke its historical records and was trading at $47,000. Tesla essentially purchased Bitcoin with the intention to accept cryptocurrency payments in return for its cars - so if you had bitcoins, you could essentially buy a Tesla car with them. This is where things start getting interesting. According to Raghuram Rajan, Bitcoin is troublesome because accepting payments with it can create a significant disparity between the amount of real money paid by someone, and what is received by the other party. Imagine, if you were buying a motorcycle with indian rupees, and suddenly the dealership informed you that your vehicle will now cost twice of what we quoted yesterday, because now, rupees are only buying half of what they did yesterday. Not cool.

So bitcoin’s price fluctuates wildly - now what? And why are some people still going crazy about it? Basically, paying money to someone who doesn’t use the same currency as you can be an expensive affair. You might be able to do it easily with paypal, companies and countries spend billions of dollars every year in paying transaction charges for cross-border payments. Bitcoin was the first answer to making these payments as simple as your 10 rupee chai payment using UPI. That’s where some analysts find the real value of bitcoin.

At the same time, other analysts are betting on the idea of blockchain in general. Basically, payments are a means to exchange value, and maintaining consistency in this exchanged value requires trust. How? So when you pay ten rupees to your chaiwala, the Indian government ensures that those ten rupees will be worth something - in other words, it acts as a medium of trust between the two parties. In bitcoin, and in blockchain, this concept of trust is created by maintaining an open ledger - where transactions are verified by thousands of people who are using the bitcoin. As a result, it's open source, and trust is cheaper to create with blockchain.

No matter where the real value of bitcoin lies, demand and supply economics constantly drag its value up and down by double digit percentages. Raghuram Rajan thinks that this is yet another bubble for bitcoin, and has therefore marked his opinion on the other end of the spectrum in relation to bitcoin, blockchain and tech enthusiasts like Elon Musk. At the time of writing, Bitcoin lost over 14% from its $57,000 peak in one day. Do you think this is yet another bubble waiting to be burst?

Check out our other articles on hot topics in finance and investments - visit www.angelbroking.com to keep yourself updated!