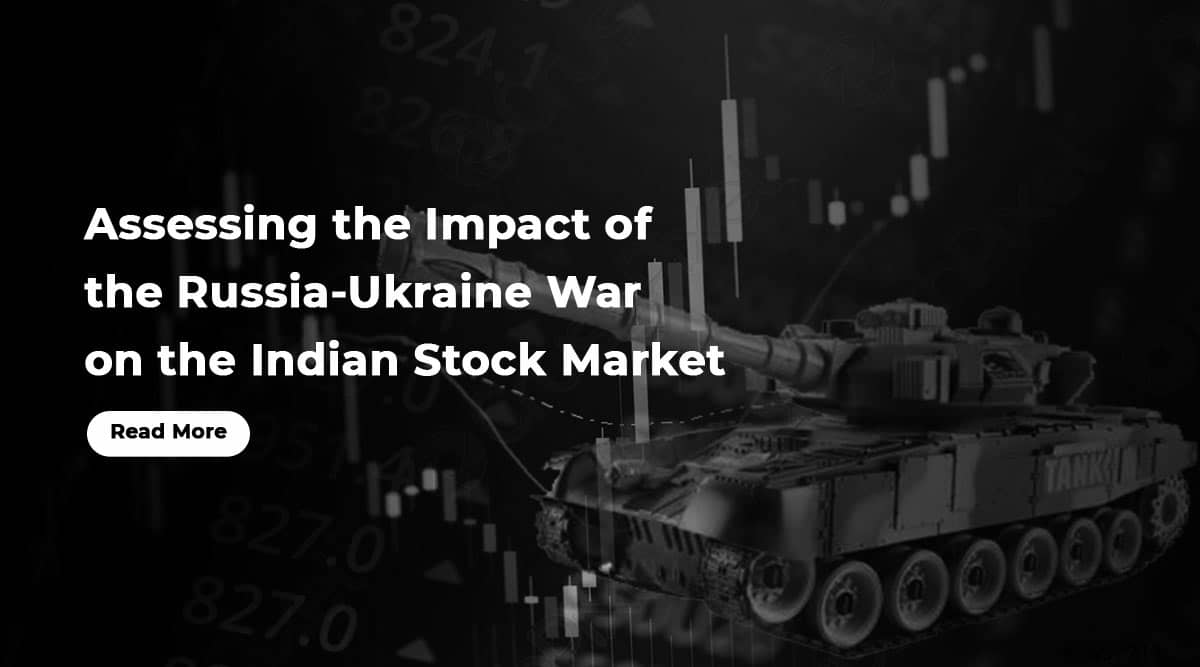 The markets have reacted adversely to the Russia vs Ukraine war. Understand how the Indian stock market has been impacted.

The previously prevailing peace within the Western hemisphere came to a close when Russia’s President Vladimir Putin began to invade Ukraine in the last week of February. Termed a “full-scale invasion” by Ukraine’s foreign minister, in the weeks that have followed, unrest and strife have not died down. Instead, shelling persists in different parts of Ukraine as the Russian army seeks to gain control over it. Global markets have reacted to the events that have transpired, and several major indices have begun to trade in the red.

The European Union, along with several nations like the United States of America and the United Kingdom have imposed sanctions on Russia in order to punish it. Each of these sanctions has been designed to hurt the Russian economy.

Given the fact that the world has just begun to recover from the damage imposed by the Coronavirus pandemic, there exist worries about disruptions being caused and prices rising.

Assessing How Energy Prices Have Been Impacted

Thus far, Russia has held court as one of the largest suppliers of energy across the world. Europe in particular has been fairly reliant on Russia for close to a fourth of its oil supplies and a third of its gas. With the Russia-Ukraine conflict in effect, crude oil prices have begun to soar and currently linger close to a 7 year high. This is most apparent among Brent oil prices that have risen above USD 100 per barrel.

According to JPMorgan Chase & Co., crude oil prices can be anticipated to average USD 110 per barrel once the second quarter begins given the Russia-Ukraine conflict. Additionally, the bank made clear the fact that the crude oil market would be likely to witness sustained greater prices in the following quarter. Only after this period would the prices begin to average to an amount of USD 90 per barrel towards the end of the year.

As per data brought forth by the US Energy Information Administration, as of 2020, China serves as Russia’s largest oil export customer. Although 42 per cent of the total crude oil and condensate Russian exports have been directed towards Asia and Oceania, China was recognised as the biggest importer of crude oil and its condensate from Russia.

India’s finance minister, Nirmala Sitharaman stated that the ongoing conflict between the two nations interspersed with a rise in crude oil prices could adversely impact India’s financial stability. India imports less than 1 per cent of Russia’s crude oil exports. This figure is negligible since a majority of the refineries located in India are not capable of processing heavy crudes that Russia exports. Further, the costs associated with transporting oil from Russia to India are too vast.

According to ICICI Securities, a brokerage firm, there are two significant impacts that will be experienced owing to Russia’s invasion of Ukraine. For starters, the upward-bound crude oil prices will result in CPI inflation remaining higher for a longer period of time. This will mean that the RBI might need to raise its rates more than was previously anticipated for the period of August to December 2022. This is likely unless the government makes considerable deductions to excise duties that apply to petrol and diesel in a bid to taper down fuel inflation.

The next impact that the brokerage firm anticipates is that given the fact that the European Union presently welcomes a considerable number of India’s exports, supply disruptions are only likely to heighten their demand. Steel and engineering goods made in India for instance are likely to witness an even greater demand in Europe now.

While India might now be lumped with a greater oil-import bill, disruptions made to the Indian economy are anticipated to be minimal.

Given the fact that sanctions have been imposed on Russia, countries that set out to defy them will be charged with reprisals issued via the western banking system. These sanctions could disrupt China’s capability of participating in the global trading system. India could benefit from this as they could be viewed as a viable alternative and could export a greater number of manufactured goods. That being said, countries like Japan, Korea, Taiwan and ASEAN are likely to benefit first.

Understanding the Moves that Investors Can Make

Oil marketing companies are anticipated to hike fuel prices and global central banks such as the Reserve Bank of India are now required to relook their policy stance. Investors are advised not to sell into fear and only traders should consider selling their holdings at this point in time. This is owed to the fact that it is counterproductive to panic right now. While buying stock should be based on your threshold for risk, if you do decide to buy during this time you should ideally direct your money towards large caps that have high-quality names. Once peace prevails and things settle down you can then proceed to invest more vigorously.