Shree Cements: A lesson in Prudence 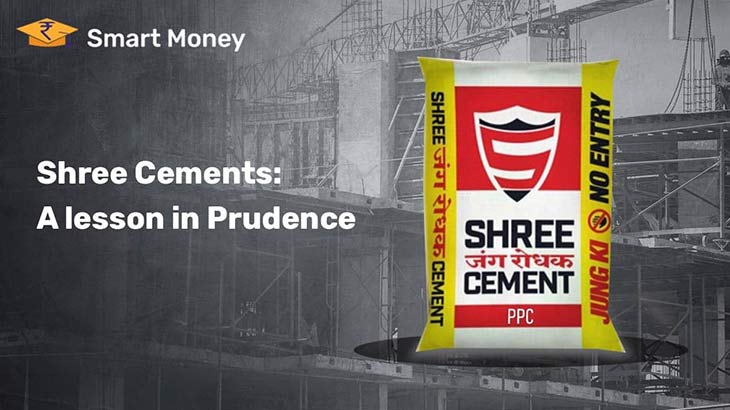 This article will help you take a deeper look into the rise of Shree Cements, through the lens of it’s stock performance over the past few years.

In February of 2020, something strange happened. Yes Bank was on its way out of the Nifty 50 index to make way for Shree Cements, a cement manufacturer headquartered in Kolkata. While we all knew of Yes Bank and the saga behind its downfall, Shree Cements was a relatively unknown company that caught the Indian markets by storm upon entering the Nifty 50.

In fact, the picture below is a good indicator of the kind of confidence it has inspired in the markets. 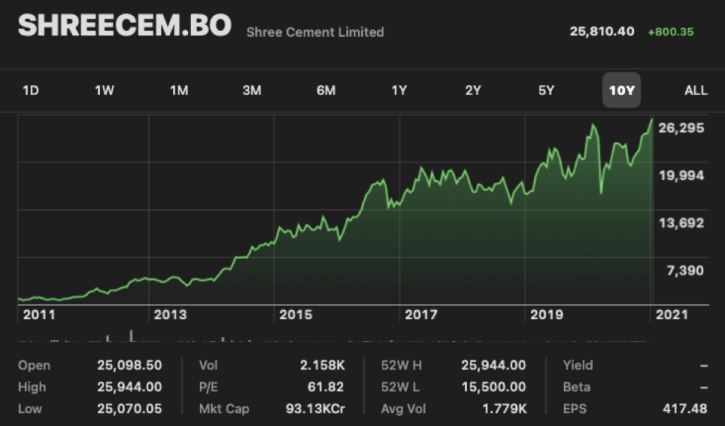 So how exactly does a company reach such record highs while simultaneously remaining under the radar? Shree Cements’ story is an illuminating tale of how prudence, proper capacity utilisation and cost leadership can work wonders when pursued correctly. In this article, we shall take a deeper look into the rise of Shree Cements, through the lens of it’s stock performance over the past few years.

When it comes to the business of making cement, there isn’t really any way to tell the product of different manufacturers apart. Cement purchased from Company A is almost indistinguishable from Company B, save for the packaging. Most retail customers of cement also operate in a similar mindset, which makes this business a tricky one to crack.

For Shree Cements, standing out meant that they had to look inward to build a robust business, and that’s exactly what they started out the decade with. In 2011, Shree Cements was lauded globally for it’s development of what was then the world’s most water-efficient way of making cement. While this was heralded as an example of sustainable growth, it was also an indicator of the Shree Cement’s relentless pursuit of cost leadership.

The first half of the decade saw the company grow in a fairly linear fashion. Unlike its peers, Shree Cements did not take advantage of the availability of cheap debt to go on expansion sprees and expanded only when it needed to. Despite stellar performance, the company did not particularly impress investors early on in the decade. Slowing growth in 2012 led the company to channel their efforts towards doubling cement capacity by venturing beyond North India, where they traditionally operated.

By 2014, Shree Cements’ started gaining recognition for their stellar cost optimisation techniques. When everyone else in the industry were struggling with rising costs of raw materials, Shree Cements had already started using alternative fuel sources to keep costs low. Opting for Pet Coke and synthetic gypsum early on ensured that their costs would remain the same while their rivals would grapple with rising material costs. All of this could be seen in it’s stock performance as it almost doubled in value in the year 2014 alone. With the stock price having grown by nearly 9 times in 5 years, Shree Cements entered 2015 as an industry cost leader, an advantage that would help them ultimately make their way to the Nifty 50.

With a majority of their returns being reinvested into expansion plans, the company’s net profits were lower than usual between 2015 and 2016. But this didn’t seem to deter investor confidence as the company’s share value grew by 56%. By this time, the company began to grow popular for having achieved industry cost leadership.

With demonetisation placing the economy under stress, Shree Cements’ robust financials stood out yet again as its peers were struggling with rising raw material prices and mounting debt burdens. In the June 2017 quarter, it’s volume had grown by a staggering 14% compared to a 4.5% growth in the industry volume. From 2017 onwards, revenues were rising steadily while net profits also went up.

Following the hub-and-spoke model of expansion and keeping costs low turned out to be the company’s winning strategy as it was about to face it’s biggest challenge yet: the Covid-19 pandemic. In the second quarter of 2020, the rest of the sector had to go back to a dismal Year-on-year recovery growth of 3%, whereas Shree Cements posted a growth volume of 16%, the second highest in the industry.

The outward migration of labourers to their hometown led to demand for cement picking up in Tier 2 and Tier 3 cities in North India, which forms a bulk of Shree Cements’ market. Noticing this trend, the company has begun to make greater efforts into making its presence known. By picking up a 76% stake in the East Bengal football club, the company’s starting to cement its position as a big and well known brand, particularly in the Eastern markets where it hopes to capitalise on demand.

All in all, Shree Cements closed 2020 with its shares trading at an all time high of nearly  ₹24,000, almost thrice the price it traded at over a decade ago. If there’s anything that can be learned from Shree Cement, it’s the importance of frugality and mindful expansion.  In an era of debt-fueled expansion sprees, companies need to learn how to adopt a more sustainable pace and keep long-term prospects in mind.