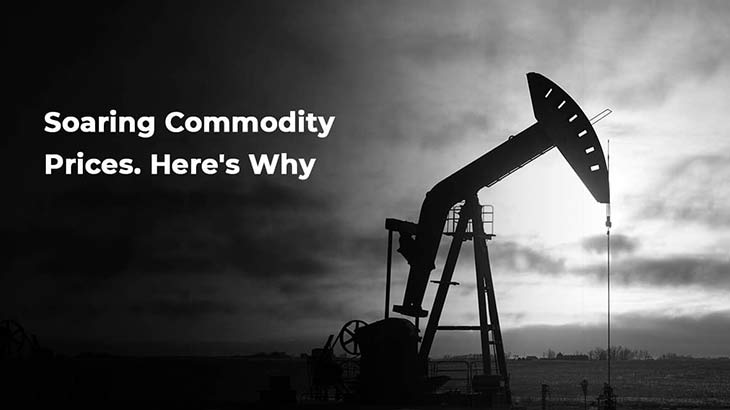 Prices of commodities in the energy, metal and agriculture sectors have seen a sustained rise in the first few months of this year.

These raw materials, used to produce almost everything else, are becoming more expensive as the global economy seems to shrug off the slump that accompanied the coronavirus pandemic.

The rally in prices of commodities such as corn, steel, copper and lumber was not seen for many years, but comes with the possibility of an increase in prices of everything else. Economies across the world are opening up as the number of fresh COVID-19 cases falls, vaccines are rolled out to large swathes of the population, and restrictions on travel are eased. However, reflation trade has also picked up as a result and raised expectations of inflation. The reopening and recovery of the economy are responsible for this surge in prices.

In a biannual report, the World Bank, however, cautioned that this increase in the prices of commodities depends on how the COVID-19 situation unravels further. Countries’ ability to control the pandemic, policy measures and decisions around the production of commodities will be telling of the price of commodities for the remainder of the year.

Copper, due to its extensive use in electrically operated products, saw a massive rise in prices because governments around the world pledged to give a boost to renewable energy. Subsequently, this meant an increase in the production of electric vehicles and more dependence on fuel-efficient technology.

The use of copper in products such as electric cars, solar panels and power grids has resulted in skyrocketing prices. As demand for low-carbon technology increases, the usage of copper is expected to rise exponentially, also giving rise to its prices.

Countries such as the United States which are on the path to rebuilding their infrastructure will be propelling a massive demand for metals. US President Joe Biden's announcement of $2.3 trillion for the reconstruction of railways and electricity grids is an example of such spending. Countries like Chile, which is a massive producer of copper, and Australia, a leading exporter of iron ore, stand to benefit.

However, on the other hand, the Chinese government is attempting to curb the production of important metals such as aluminium and steel. This is bound to have a bearing on the global prices of these metals, since these prices are defined by global cues.

Steel prices saw a massive surge, with steel futures in the world's largest producer, China, breaking all records. This has occurred in the backdrop of the government taking steps to halt the output of steel. In Europe and America, where production is already being carried out at maximum capacity, benchmark prices were given a boost as they attempt to meet high demands.

This is in contrast to the struggling steel production in America and Europe until recently, which was bearing the brunt of global overcapacity. As a result, the industry saw massive job losses over the past decade.

Due to COVID-19 and other disease outbreaks among farm animals such as the pig disease that wreaked havoc in Germany, meat businesses have suffered. A rise in the prices of crops has also dealt a blow to the production of meat from pigs, poultry and cattle. Corn fed to farm animals saw a doubling of prices over the previous year, while soybean meal prices rose by 40%.

The United Nations Food and Agriculture Organisation said that food prices rose for the eleventh straight month in April. They reached the highest level since May 2014. The FAO's price index, which takes into account the prices of oilseeds, cereals, dairy products, sugar and meat rose in April to 120.9 points, as against 118.9 points in March.

The prices of agricultural produce shot up over the previous year, thanks to limited supply from South America and high demand in China. The futures of Arabica coffee increased by 33%, and wheat prices were the highest since 2013. The price of raw sugar also shot up. Prices of these commodities are expected to stabilise in 2022.

Prices of crude oil reached record lows over the course of the pandemic, but bounced back supported by global economic recovery and a decrease in production by the Organisation of the Petroleum Exporting Countries (OPEC). The demand for crude oil will also rise as restrictions are eased and vaccines become available.

The average energy prices are expected to increase by one-third than in 2020 and oil may average at $56 per barrel. Crude oil may even average at $60 per barrel in 2022.

Commodity prices, although an indicator of inflation, do not define inflation by themselves. The increase in the price of these goods also takes a long time before being reflected in the price borne by consumers. It is only a small part of the cost to retailers who often choose to not pass it on to customers. However, there is a limit to the amount that can be absorbed by the retailer, before these prices begin to affect the end customer.

The World Bank, however, has said that although economic growth has picked up in early 2021, there is much uncertainty around the durability of this recovery. Even though most commodity prices are above the pre-pandemic levels, developing countries, exporters, importers and emerging market economies must divert their focus towards bolstering their short-term resilience, the global body has advised.