Stock Picks Based on Q4 Results 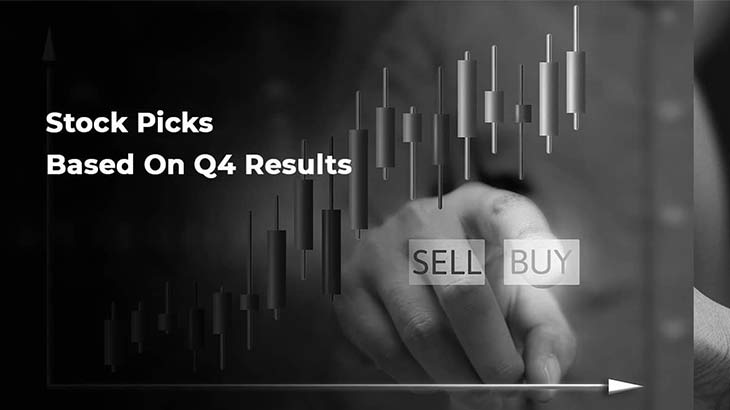 As FY21 drew to a close, it was a déjà vu moment as lockdowns (although state-level), and a second wave of the COVID-19 pandemic defined investor behaviour on the market.

However, experts speculate a strong market and economy riding the wave of record foreign reserves, little inflationary pressure and a stable currency in FY22. This, as the second COVID-19 wave is expected to be arrested soon with restrictions and vaccination. The Q4 reports once again emerged amidst conditions that were strikingly similar to last year’s, and denoted mixed earnings for companies. Keeping all this in mind, here are the stocks that performed well in Q4.

For the quarter ended in March 2021, Bajaj Finserv reported a four-fold increase in its net profit. Thanks to a boost to its insurance business, Bajaj Finserv earned a net profit of Rs 979 crore, four times its Rs 194 crore net profit during the same quarter in FY20. Its consolidated income during the period rose from Rs 13,294 in the previous corresponding quarter to Rs 15,387 crore in 2021.

Meanwhile, the profit after tax in FY21 increased to Rs 4,470 crore from Rs 3,369 crore in the year-ago period. In FY20, Bajaj Finserv's consolidated total income was Rs 54,351 crore. This figure reached a record Rs 60,591 crore in 2021. The stellar profits were propelled by insurance, with its subsidiary Bajaj Allianz General Insurance Company turning record annual profits of Rs 1,330 crore. In the previous fiscal, it had reported Rs 999 crore in annual profit.

The annual gross written premium for Bajaj Finserv's life insurance arm also saw an all-time high of Rs 12,025 crore in FY21. Assets Under Management also touched the record level of Rs 73,773 crore in the fiscal year ended March 2021. Stating that it has recorded a satisfactory profit growth in an "extremely demanding year", Bajaj Finserv said that it expects the risks posited by the second COVID-19 wave to remain intact for the first two quarters of FY22.

“With strong solvency, well above the required capital supported by healthy liquidity, continued focus on risk and collections, digitised processes and improved cost structures, we are in a better shape than we were last year to face any adverse event," Bajaj Finserv said in its report.

The company expects to grow in double digits in the new fiscal year. Its net profit (normalised) also fell in FY21 to Rs 371.4 Crore and revenue decreased 6.7% to Rs 4,132.4 Crore in the previous year. The company management attributed its success to enhanced digital capabilities and optimisation of processes. A final dividend of Rs 17 per share for FY21 has been recommended by the board.

Profits of TVS Motor grew three times in the March quarter due to a 47% increase in sales. Its standalone profit was Rs 289 Crore in Q4 FY21 as compared to Rs 74 Crore in the year-ago period. Revenue, meanwhile, increased by 53% to Rs 5,322 Crore.

EBITDA grew by 119% to Rs 536 Crore as TVS sold close to one million two-wheelers and three-wheelers over the course of the quarter. The sales of two-wheelers rose by 50% compared to last year, but three-wheeler sales fell by 5%.

TVS Motor has said that it expects a slow first quarter in the new fiscal year, but improvement in the subsequent quarters through a better product mix, lower marketing spending, and cost-cutting. It moved to a zero credit period, which along with better operating volume helped pull down net debt to Rs 110 Crore. Last year, the net debt was Rs 1,600 Crore.

Wipro saw a 27% rise in profit and a 3.4% rise in revenue in the quarter ended March 2021 - its best quarterly results in close to a decade. It also expects 2-4% growth in the present quarter (April-June). The profits for the quarter were at Rs 2,974.30 Crore and with a revenue of Rs 16,245.40 Crore - all possible because Wipro closed some big deals in that duration.

Without considering revenue from recent acquisitions, the forecast for FY22 revenue is between $2.2 Billion and $2.24 Billion for the IT giant. A simplified operating structure and renewed talent management, along with large deals from international corporations made it possible for Wipro to exceed expectations.