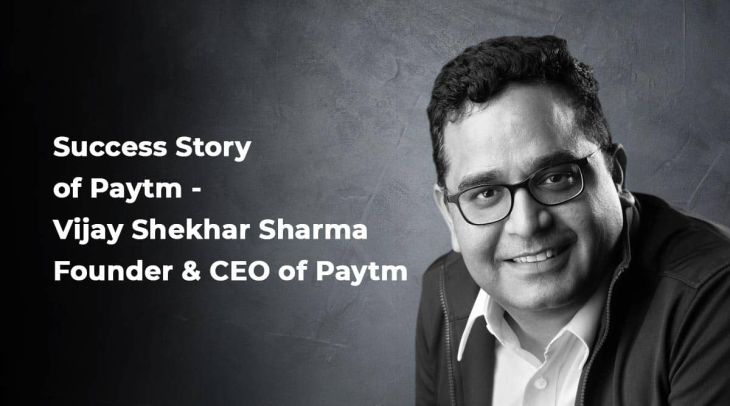 This is a story about the journey of India’s second-youngest billionaire – Vijay Shekhar Sharma, and his brainchild, Paytm that revolutionised digital payments and financial services in India

Over the last decade, the Indian startup ecosystem has witnessed a burgeoning number of many multinational companies (MNCs) and entrepreneurs, both in terms of their growth and net worth. If you have been an observer of Indian startups over the last half a decade, the success story of Paytm and its successful CEO - Vijay Shekhar Sharma, is not something you would have missed noticing. Paytm is regarded as a pioneer of the e-wallet ecosystem in India, and it still continues to rule the roost despite some stiff competition from other e-wallets that emerged after Paytm.

The success story of Vijay Shekhar Sharma – the Paytm CEO, is closely tied with Paytm’ success story, so much so that he is the second-youngest billionaire in India today with a net worth of 2.35 billion USD, as per the Forbes 2020 list of 100 richest Indians. Let’s get a peek into Vijay Shekhar Sharma’s early life, education, and passionate struggle to realise his dream – Paytm.

Hailing from an economically backward society in Aligarh - a sleepy town in India’s most populous state of Uttar Pradesh, Vijay Shekhar Sharma belonged to a modest middle-class family that greatly emphasised educational values. Alongside, his father being a school teacher had a great influence on Mr. Sharma to be the bright student that he was. He did his entire schooling in the Hindi medium, and he quickly and confidently overcame the hindrance of his lack of basic English language skills to secure a college admission. With polished English skills, Mr. Sharma bagged an admission into a prestigious engineering college in Delhi.

Life seems to have taken a sharp turn for the Paytm CEO. Soon, he went from being a bright student to one with declining grades. This was also the time when his interest in entrepreneurship began to take root.

Driven by Stories of Successful Entrepreneurship

While pursuing his engineering degree in the 1990s, Vijay Shekhar Sharma’s interest in entrepreneurship began by learning about the success stories of mega-brands like Apple, HP, Intel that went on to become the biggest names in the startup ecosystem. He realised that the success stories of all these firms emerged from the Silicon Valley in the US – the startup factory of the time. Mr. Sharma dreamt of being part of Silicon Valley, but with a grave dearth of resources, he soon realised that he needed to create one such ecosystem in India.

Journey of Entrepreneurship - Struggles and Opportunities

Along with a few of his college mates, he started to build his own content management company called Xs! Corporation, - a web portal and a search engine that offered internet-based services, including web directories. The company was engaged by some of the reputed newspaper outlets in India like The Indian Express. The company was doing well and managed to generate a turnover of Rs. 50 Lakhs between Feb-May 1999. He later sold off the company for half a million dollars and shared it equally between four of his partners.

This was also the time when he finished college and bagged his first job with an MNC, only to quit after six months. He decided to take the road less travelled.

One 97 and the Advent of Paytm

After quitting his first job, Vijay Shekhar Sharma co-founded One97 Communications Ltd in 2001- a mobile value-added service company, and also Paytm’s parent company. It was called One97, as it was then the directory inquiry service number of BSNL. Unfortunately, the 9/11 attacks followed and the business crashed leaving him alone with his partner’s departure. Left with no money, and pressure from the family to ‘settle down with a stable job so that he could be married off at a mere 25 years of age.

Succumbing to family pressure, he did take up a job as a consultant only to sustain himself. Despite leading a meagre life, his mind was constantly working towards innovation around the telecom sector when smartphones became immensely popular. With One97, he decided to reduce the use of plastic cards, and impact people’s lives through Paytm – a mobile wallet accessible through smartphones or its web portal.

With Paytm, One97 delved into three key areas of the internet – content, advertising, and commerce, and could successfully raise a sum of 2 million USD on its own without a need for outside funding. Today, Paytm’s success story is synonymous with the rise of the e-wallet start-up ecosystem in India, that Mr. Sharma had dreamt of creating. The Paytm Payments bank is the first-platform to offer a zero-balance account facility, besides allowing UPI payments, and online shopping facilities.

Revolution and Growth of Paytm

Paytm has changed the landscape of the retail sector thanks to its easy mobile-based payment mode. Today, it has turned into a verb, rather than a noun. The e-wallet, approved by the RBI, was launched by Vijay Shekhar Sharma in 2010, by its parent company One97.

Although Paytm started off as a bill payments and online mobile recharge platform, today, it has evolved to make transactions of all kinds, with the capacity to make 5000 transactions per second.  The e-wallet is secured and the app uses Verisign-certified SSL 128-bit encryption technology which ensures that all that online data pertaining to the user is safeguarded. The payments platform further received a boost after demonetisation, when its usage increased, with users touching 200 million by November 2017. The payments platform also launched the Paytm Payment Bank in 2017. According to reports, the payments platform serves more than six lakh villages in the country via digital payments.

Vijay Shekhar Sharma’s success story is only inspiring him further to touch the lives of a billion Indians by expanding Paytm’s operations to financial services, like providing the small and medium enterprises (SMEs) with digital financial technology to help grow their businesses. With newer goals in his mind, he also aspires to build a large new-age financial services company that offers banking, insurance, mutual funds, and stocks, and payments platforms to millions of small businesses. Payments, along with financial services remain Paytm’s biggest bets, that’s only proving right with newly added revenue streams.

Paytm has now grown from 40 million transactions per month in FY 2014-2015 to 400-450 million monthly transactions in FY 2019-20. Also, some 17 million merchants were already using its payments and financial services. Alongside, Paytm’s revenue also increased from Rs. 780 Crores in FY 2016-17 to Rs. 4,217 Crores in FY 2018-19. With more revenue streams opening up, Paytm can only aim higher by expanding its financial and digital payment services.

Paytm has won several awards and recognition, including the Diamond SABRE Award in the Company of the Year segment in 2017 and the same award in the Super Achievement in Reputation Management for that year. It has also won the Gold SABRE Award in Financial Professional Services at the SABRE Awards. Its founder Vijay Shekhar Sharma has also won many awards and has been on the Forbes Top 40 Under 40 list, apart from the 50 Most Influential Young Indians by GQ. The Paytm founder was also the youngest billionaire in India back in 2017.

The success story of Vijaya Shekhar Sharma is one of grit, determination, hardship, and smart work, all of which have also paved the way for Paytm’s success story. Besides offering lending and financial services, and being a payments platform, Paytm also facilitates the selling of train tickets to air purifiers, and offers an online gaming experience. Surely, the company has left no stone unturned in reaching the top. Paytm’s success story has been full of challenges at every juncture and a key lesson that one can borrow from Vijay Shekhar Sharma’s success story is to Never Give Up and Keep Working against all Odds.