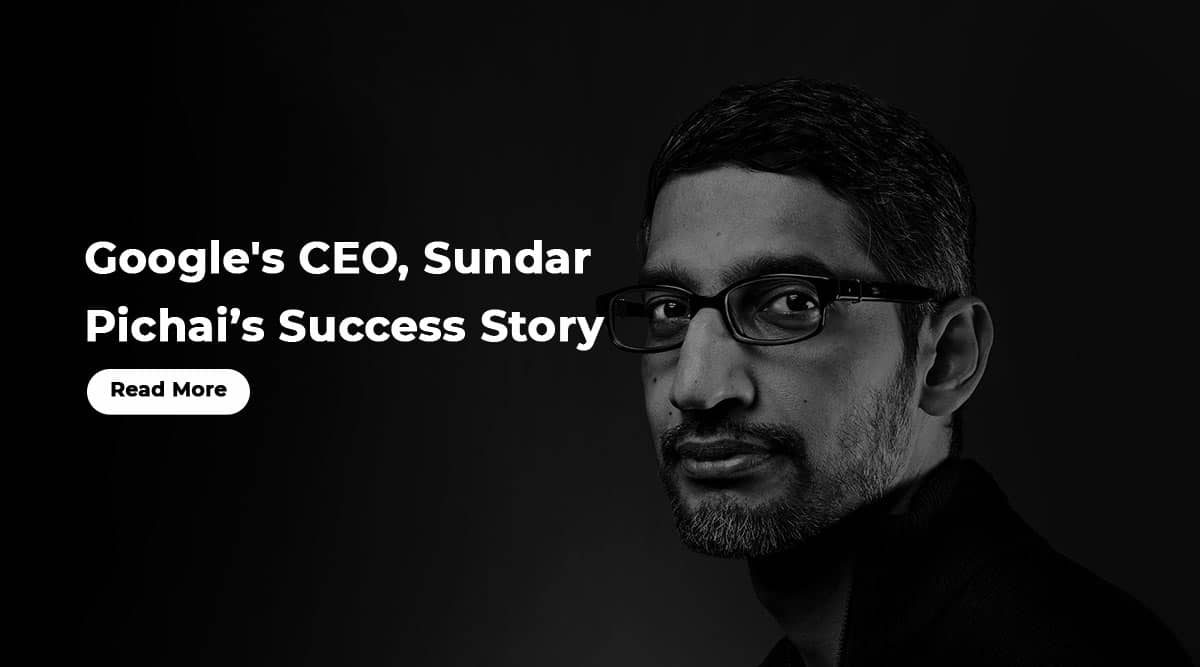 The career trajectory and early life of Sundar Pichai, Google’s CEO, have been discussed in the article provided below.

If you’ve ever used the internet to look something up, it is likely that you have used Google’s search engine to draw up results. Today, Google is recognized as a multinational technology company that provides a multitude of internet-oriented services and products that range from a search engine to cloud computing and covers several things in-between. As of 2015 (and 2019), Sundar Pichai has served as the CEO of Google, Inc. as well as its parent company, Alphabet Inc. This article seeks to walk you through the steps that led to his acquiring this role.

Born in Tamil Nadu, India in 1972, Sundar Pichai has accomplished a lot over the years. While he grew up in a modest home, his parents ensured that he and his siblings received a good education. His interest in technology resulted in him going on to acquire a Business of Technology degree in metallurgy from IIT Kharagpur in 1993. He then got the opportunity to study at Stanford University as he was awarded a scholarship in a Master of Science program that focused on engineering and materials science. After graduating in 1995, he continued to stay on in the United States and went on to acquire an MBA from University of Pennsylvania’s Wharton School.

Climbing the Corporate Ladder at Google

Although Pichai briefly worked at McKinsey & Co., he ultimately went on to work at Google in 2004 where he served as the head of product management and development. One of his first projects focused on the Google Toolbar which was relevant to those using Microsoft Internet Explorer and Mozilla Firefox Web browsers and which made it possible to access the Google search engine with ease.

Soon after, Pichai went on to work on developing Google’s in-house browser called Chrome which was released in 2008. This year also saw Pichai earn the title of vice president of product development which meant he began to take on a more public role. Fast forward four years and he was the senior vice president. By 2014 he was assigned the role of product chief for Google as well as Android smartphone operating systems.

Sundar Pichai was understood to have helped Google negotiate the USD 3.2 billion deal that led to the company acquiring Nest Labs in 2014. As a result, when Larry Page and Sergey Brin, Google’s co founders, decided to create Alphabet Inc., in August 2014, Pichai was assigned the role of Google’s CEO which now served as Alphabet Inc.’s subsidiary. When Page stepped down as the CEO of Alphabet in 2019, Pichai took over his role as well.

While Pichai’s desire of creating Google’s own web browser was originally shut down by one of the company’s key investors, he was able to ultimately convince the company’s founders to create the same which resulted in it being formed in 2006. During this year, Microsoft removed the google search engine from the Internet Explorer web browser and replaced it with Bing. Google lost out in a major way as they used to get tons of traffic each day via Internet Explorer which meant they were previously able to make millions of dollars each day.

Pichai, however, was able to overcome this hurdle with his team. Within 24 hours they created a loop-hole search owing to which it was possible for the Google search engine to reappear via a pop-up window for those that used Bing. This meant that the company was able to regain 60 per cent of their users who now used Google once again.

Google as a company also set in line a string of strategic moves aimed at preventing this sort of surprise attack from occurring in the future. The company signed their search engine to HP as well as other computer distributors in order to ensure that the Google Toolbar would serve as their products’ default search engines.

As a visionary, Sundar Pichai believes in integrating newer technologies with those of the past. His current area of interest is artificial intelligence, and he seeks to expand upon voice recognition offerings and capabilities. He has been responsible for smartphones utilizing visual recognition software.

Pichai met his wife Anjali at IIT Kharagpur and went on to marry her soon after they graduated. They have two children and live in California.

He serves as Google’s third CEO and happens to be the company’s first non-white CEO.

At Wharton, Pichai was recognized as a Siebel Scholar as well as a Palmer Scholar – each of these prestigious distinctions was assigned to Pichai owing to his academic talents.

2014 saw Pichai serve as a potential candidate for the role of Microsoft’s CEO, however, Satya Nadella went on to acquire this position.

The Sundar Pichai story is one of grit, determination, and perseverance. His hard work has paid off and he continues to reap the rewards of his ideas and creations. Google as a company has benefited tremendously from his contributions.