The Rise of Metal Stocks Amid the 2nd Wave 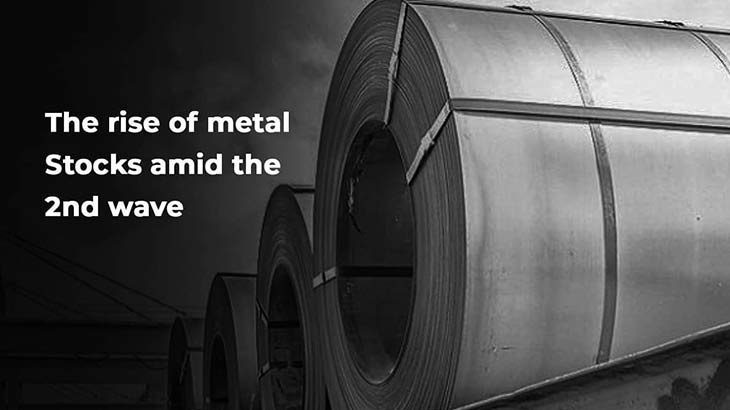 The past few months have brought with them several changes.

To begin with, there has been a steady rise in the price of a number of metal stocks on varied stock markets across the world. The surge in their prices is owed to several factors. In India, this rise in value has been visible on the stock markets and hasn’t been limited to Western markets alone. This is especially important to note considering the current state of the country brought on by the 2nd wave of the Coronavirus pandemic. Amid this setting, the rise in the value of metal stocks is interesting to note.

What Metal Stocks Have Risen?

Several metal stocks have seen an upsurge in their value over the past few months which have surpassed their previous highs over the past few years. A large number of these have been industrial metals which range from copper and iron ore to palladium and aluminum.

Copper – The value of copper lies in the fact that it is an important metal used in varied electrical wiring outfits, connectors, and in a number of motor vehicles. It is used in building construction, power generation, and transmission. Since the Coronavirus seems to have eased up in other parts of the world, copper’s value on the stock market has risen in leaps and bounds as demand has risen. The U.S. stimulus package too has encouraged its purchase. The rise in the value of copper on the stock market has continued despite there being a surge in the output available from a significant mine and an increase in inventories of the same in China. It has now been traded for over $10,000 a tonne in the past week. Non-American buyers have made copper purchases with greater force owing to the fact that it is now less expensive for them given the fall in the value of the dollar.

Iron Ore – Iron Ore too has continued to witness a rise in its value on the stock market. This is owed in part to Chinese steel mills remaining elevated. Low inventories of the same in China have further fueled an upward rise in the price of iron ore on the stock market. If we look at the Indian market, the stock of the Steel Authority of India (or SAIL) has surged by greater than 50% since April. The stock has risen dramatically from ₹100 to ₹128 indicative of a 28% rise. This state-owned enterprise has risen in value due to a number of factors including but not limited to capacity expansion, access to captive iron ore sources, and added room for price hikes according to analysts at Equirus.

Palladium – While the price of Palladium on the stock markets has continued to be on the rise since the new year, it reached a record high in the past 10 days soaring right up to $2,918.50. This surge has been enhanced by the depleting supply of metal across the world. While this metal has always been in short supply, rumors of it being particularly scarce have driven up its stock prices. Palladium is one of the most precious metals which is of major value to automakers responsible for manufacturing pollution control devices for vehicles. More stringent measures by governments to limit cars using combustion engines have driven up its demand.

Aluminum – The importance of aluminum in today’s world cannot be underscored. It’s a valuable metal to a number of industries ranging from transport and packaging to construction. Concerns pertaining to the stock of aluminum brought about a rise in the stock price of the metal that reached a three-year high. China’s increased interest in aluminum lies in the fact that it plans on using it with more frequency in smelting. This is because the Chinese government has clamped down on industries that are causing too much pollution. The country is presently too coal-dependent when it comes to generating electricity. By using aluminum in place of coal, China can bring down its pollution emissions. With its usage set to rise and inventories of the same depleting at a rapid pace, stock prices of aluminum have been rising.

What Has Led to the Rise of these Metal Stocks?

The primary underlying reason that has driven up the value of metal stocks is that several large economies have been beginning to recover from the stupor the Coronavirus pandemic brought onto them. This recovery has been accompanied by a rise in demand for varied goods and services. Since a lot of these large economies have also taken on a climate-conscious role, the kinds of demands have also changed. There is now a rising demand for electric vehicles, wind turbines, and solar-powered energy sources each of which uses these metals. It is, therefore, no surprise that the price of metal stocks is rising in value. Furthermore, Latin American countries which have a number of metal mines have seen a rise in the amount of Covid infections which has fueled supply concerns. These supply issues combined with increased demands in the West have fueled the price of metals.

Th 2nd Coronavirus wave which has hit the country has proved to be particularly brutal and has adversely impacted human lives, the economy, and countless other sections of society. The curfews imposed to curb the effects of the same have been lenient in comparison to the stringent lockdown enforced in 2020. That being said if the government has to impose stronger measures to bring the pandemic under control, the Indian economy may not be able to recover immediately until the virus is under control.