The Rise of Reliance: as told through its stocks 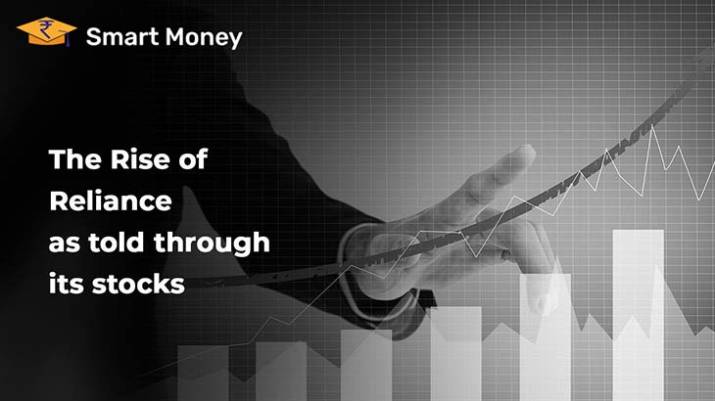 Reliance Industries Limited (RIL) is India’s largest publicly traded company. Read on to know more about history of Reliance stocks and it’s rise in the Market.

Reliance Industries Limited (RIL) is India’s largest publicly traded company and became the first-ever Indian company to exceed US$150 Billion in market capitalization. Its shares trade slightly under ₹2,000 today whereas a decade ago, one could purchase it for about ₹500. Here’s what RIL’s stock looks like over the past 10 years.

Surprisingly, most of its gains started around 2018 and the price saw a sudden spike only this year. Read on to find out what steps Reliance took and the factors that contributed to its success.

Reliance entered the 2010s as a formidable player with a few key businesses that were already a force to reckon with. All of its most prominent businesses today; namely, petrochemicals, retail, and telecommunications had their seeds sown between 2010-2015.

The company’s energy division got a boost after forging a partnership with BP to capitalize on the latter’s deepwater exploration capabilities. This move aimed at securing the energy security of India and further cemented Reliance’s reputation as a titan in India’s energy space.

The company had also started working on a 5-year plan to expand its retail operations and went on a spree of establishing retail huge outlets. This strategy of focusing on hypermarkets to drive growth worked well for it in the initial years and culminated in it becoming India’s largest retailer by revenue in 2014.

With the advent of 4G in the Indian market, Reliance made a preemptive move by acquiring Infotel Broadband Services Limited, the only successful bidder for nationwide 4G spectrum auction held by the Indian government. This move allowed it to disrupt the telecommunications market and in acquiring a 33% market share by 2020.

By 2015, Reliance was on the cusp of ramping up its business across its verticals. Since most of this was happening behind the scenes, its shares remained stagnant for a few years already. By 2017 however, the prices started climbing rapidly. Between 2017-2019, the share prices had tripled and the company’s prospects were brighter than ever.

Reliance Jio (RIL’s telecommunications wing) was launched towards the end of 2016 and disrupted the 4G data services market by offering voice and data services at rates as low as ₹300 a month. This no-holds-barred approach to conquering the telecom market paid off as Jio closed 2019 by being the largest telecom operator in India and the third-largest telecom operator in the world with a whopping 405 million subscribers.

Reliance Retail was no slouch either. By 2020, the retail division had a turnover of ₹1,30,566 crore and had earned the distinction of being India’s largest, fastest-growing retailer. This combined with the expansion of the petrochemicals and telecom business saw its stocks trade at ₹1,500 apiece by the end of 2019. However, the best was yet to come.

Building on top of its strong retail and data services, Reliance rounded off 2020 by carving off a separate entity called Jio platforms limited, that would comprise of all digital initiatives and telecom assets. This subsidiary attracted a slew of investments from some of the top technology companies like Facebook, Intel, Google, and Qualcomm. A few private equity firms as well and two sovereign funds participated as well. Jio had raised over US$20 Billion and reduced its net debt burden by almost 90%.

At the time of writing this article, RIL’s stock trades at almost ₹1,978, which is 5 times what it was 10 years ago. Reliance’s success was a result of the following traits: