Top 10 Most Inspirational Person in India 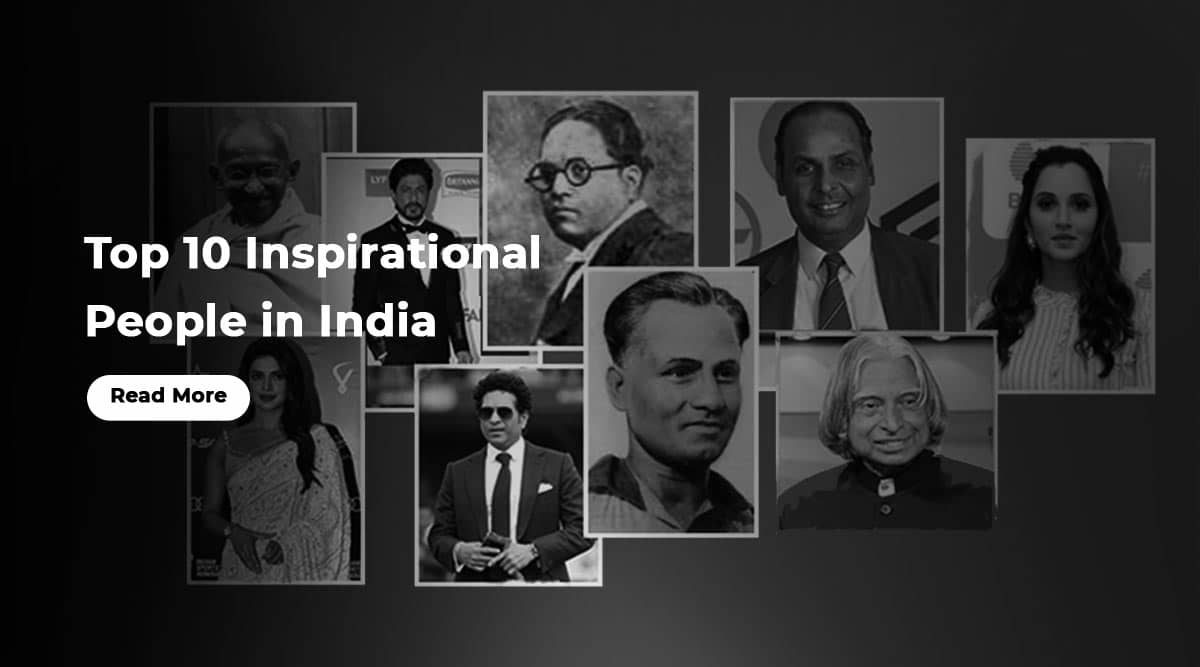 Learn about some of the most inspiring personalities of India by examining the article provided below.

The Importance of Being Inspired - A Brief Overview

It is important to always stay inspired and continue to be inspired by role models as they encourage you to achieve your very best and pursue dreams that you may imagine to be out of reach. Many times, famous personalities can be perceived to have a charmed life devoid of struggle, however, this is more often than not far from the truth. Individuals we idolize have also had to undergo certain challenges and these very difficult scenarios are often what has ultimately contributed to their success. Continue reading to learn about some of the most inspirational people in India.

Commonly referred to as the father of the nation, Mahatma Gandhi was born on October 2, 1869, in the western state of Gujarat. Having acquired his law degree overseas at the University College London, Gandhi went on to become a barrister in England before moving back to India.

He leveraged the political knowledge and techniques he acquired in England and used them against the British in India. He held a firm oppositional stance towards colonial ideals and was a nationalist and political ethicist. Gandhi condemned violence of any and all kinds and chose to fight for India’s independence without bringing violence into his national campaign. Ultimately, he was able to spread his message of non-violence and peace across the world owing to which he came to be viewed as an icon that inspired (and continues to inspire) the masses.

Recognised as the chief architect of the Indian constitution, Bhimrao Ramji Ambedkar was born on April 14, 1891, in Madhya Pradesh. His qualifications didn’t lie within the realm of politics alone as Ambedkar was also recognised as an economist and as a social reformer. Educated at some of the finest educational institutions in the world ranging from the London School of Economics to Columbia University, Ambedkar used his wits to tackle discrimination at the grass-root level. The Dalit Buddhist movement is credited to him. This campaign helped him successfully tackle social discrimination that had plagued Dalits.

Qualified as a professional scientist, APJ Abdul Kalam served as the country’s 11th president and was often termed the people’s president. The early years of his life weren’t easy as Kalam was born into a home of modest means. In order to support his family though, he began selling the local newspaper at a newsstand in order to support his family. Later on, as a student, he wasn’t perceived to be the brightest spark, however, his continued hard work allowed him to achieve success.

Dhyan Chand is recognised as one of the finest hockey players the country has ever seen. Born on August 29, 1905, in Allahabad, Dhyan Chand was a member of the Indian Hockey team who went on to win three gold Olympic medals. During his time as a member, Dhyan Chand helped the Indian hockey team acquire great success. This is evident from the fact that he helped them walk away as Olympic winners on seven out of eight occasions in the time between 1928 and 1964. His ability to score goals led him to be a legendary hockey player.

Unless you’ve been living under a rock, you are likely to be familiar with the Reliance brand. Dhirubhai Ambani was the founder of Multinational Reliance Industries. Born on December 28, 1932, to a working-class family, Dhirubhai Ambani faced a string of struggles as a child. As a young adult, he moved to Yemen where he worked as an attendant clerk at a gas station. As there didn’t seem to be much upward mobility within this position, Dhirubhai chose to move back to India in 1958. With just INR 50,000 he began a textile company with his cousin. Ultimately though, he chose to export goods for a more affordable price than his competitors owing to which he experienced enormous success.

At this point in time, Shah Rukh Khan’s name is almost synonymous with Bollywood owing to the amount of success he has enjoyed within this industry. Born on November 2, 1965, in the country’s capital, Khan’s early days saw him struggle as he sought to enter the Indian film industry. With over 80 Bollywood movies under his belt today, though, Shah Rukh Khan has come a long way from his humble beginnings. With a fan following that extends beyond India’s borders, it should come as no surprise that he is an inspirational person in India.

Salman Khan is another male Bollywood actor that has been able to inspire the hearts of millions in India as well as overseas. However, his credentials extend beyond acting and include anchoring and being a film producer. Born on December 27, 1965, Salman was born into a film family and inherited their passion for cinema. Today, he serves as a source of inspiration owing to his charity foundation called Being Human.

Cricket is one of India’s most popular sports and is often associated with the iconic Sachin Tendulkar. Born on April 24, 1973, Sachin is a living legend in the realm of cricket and has received a number of accolades owing to his performance on the field.

There are many titles associated with Priyanka Chopra that range from actor and singer to being crowned Miss World in 2000. Her success within the media industry has seen her take not only Bollywood but also Hollywood by storm. She currently serves as one of the wealthiest Bollywood actresses and has a net worth that amounts to USD 70 million.

Saniya Mirza is a famous tennis player that hails from Hyderabad. She is recognised as a former number one doubles champion tennis player who happens to have also one six grand slam titles over the course of her career.  During her 10 year-long career, Saniya Mirza saw herself ranked as India’s #1 player by the Women’s Tennis Association.

While you may be familiar with individuals mentioned in the aforementioned list, their professional careers are meant to inspire you and encourage you to never lose faith.