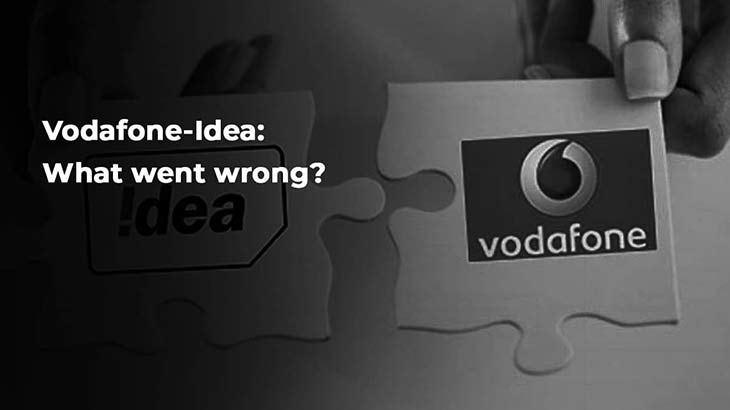 Mergers and acquisitions can turn the eyes of stock market investors towards the possible action that such large-scale actions can bring to the future of businesses.

There have been a number of successful mergers in the recent years, and have disrupted the meaning of leading within an industry segment. Notable examples include Exxon Mobil, Disney and Pixar, and AOL and Time Warner. But mergers can go south too - and the Vodafone Idea merger has remained in the latter category so far. So what went wrong? Let’s find out!

Vodafone and Idea have been two of the strongest players in the India telecom industry. As of 2016, Vodafone and Idea were in fact, the largest telecom companies by their subscriber base, only falling behind Airtel, which enjoyed a 24%+ market share at that point. After the merger in 2018, Vodafone-Idea led in terms of market share, capturing over 38% of the subscriber base. However, after the entry of Reliance-backed Jio, things changed drastically. Reliance Jio now leads the market with a 35% market share - followed by Airtel at 29%, and Vodafone-Idea at a mere 25%.

Over the course of two years, Vodafone-Idea lost over 130 million subscribers - and this shift was concurrent with the introduction of the 4G spectrum and fast connectivity in India. What happened in the background, however, was not as simple. In fact, this drastic shift in the telecom industry can be attributed to well-researched business models at play, in addition to what competitive advantage means in the telecom industry.

When Reliance-Jio entered the telecom industry, it was the first player to bring voice over LTE technology - something that leverages internet connectivity to enhance and support voice calling to other people. On the forefront, this technology enabled better voice connectivity and 4G meant super fast data connections over mobile devices. But in the background, this technology also enabled Reliance-Jio to bring consolidated plans where subscribers could enjoy unlimited calling for free, across any network within the country. For Vodafone Idea, it took much longer to bring VoLTE and 4G offerings to the market - and in the process, it lost a considerable share of its subscribers to Reliance-Jio.

Now, we all know how tedious it is to change your telecom provider despite the introduction of number portability. No one wants to do it. But when Jio entered the scene, it captured over 33% subscribers within a matter of three years. This period was dotted with pricing wars, where each provider strived to provide competing plans at the lowest possible prices. This is where Vodafone Idea fell short of the deep cash reserves that Jio brought to the scene (as a consequence of being Reliance’s child company) and industry-leading connectivity speeds that Airtel brought to the market.

However, this was not all. The Indian telecom market is known for a notorious degree of competition in addition to paper-thin margins that can be made against your subscriber base. In fact, the average revenue per user (ARPU) stands slightly over Rs. 100 - for Vodafone Idea, this number was at 108, while Jio and Airtel enjoyed an ARPU of 124 and 129 respectively - thanks to sustainable competition and efficient business practices that shoulder the massive scale of operations in the background.

The depth of the crisis is difficult to imagine. When the merger happened in mid-2018, Vodafone Idea was trading in the 50-70 rupees price band. However, the price plummeted to below Rs. 10 in the following year, and at one point, VI was trading at Rs. 3.4 per share - which almost qualified it as a penny stock if we look solely at the price levels. However, there were other factors that drove the prices this deep. A part of this downfall can be attributed to an unhealthy cash flow that has been tormenting the company’s balance sheets over the last couple of years. At the time of writing, VI continues to trade at a price of Rs. 10 per share.

Currently, VI owes a massive sum of money to the government - to be precise, VI has been fighting what now seems a long-lost battle with the supreme court over what adjusted gross revenue means, and its regulatory-related dues. At one point, the company owed upwards of Rs. 44,000 crores to the government - which led to a massive downfall in its credit rating too. In the recent past, the company has asked for a two-year moratorium on its dues, while the government planned on leveraging 3rd party auditors to reconcile the payments that the company needs to make - in fact, the failure of VI could be huge enough to majorly affect the Indian financial system system - given the depth of dues and India’s not so well-managed fiscal deficit.

In sum, both Vodafone and Idea joined hands to combat the entry of Jio and its revolutionary business practices that redefined the meaning of operating efficiently and profitable in the telecom sector. However, both the companies not only failed to introduce competing technologies and plans in the market fast enough to avoid the disaster. Coupled with Jio’s financial stronghold and Bharti Airtel’s singular focus on delivering excellent connectivity and speeds, VI suffered the qualms of competing in an industry with high operating costs and thin revenue margins. Add some long-standing legal challenges to the mix, and the stock market witnessed a 94%+ decrease in the share prices of India’s third largest telecom firm. Is there a comeback in VI’s future in India? Only time will tell!

Read insightful reports on some of the most perplexing topics in the Indian stock market for free! Log on to www.angelbroking.com to discover more.