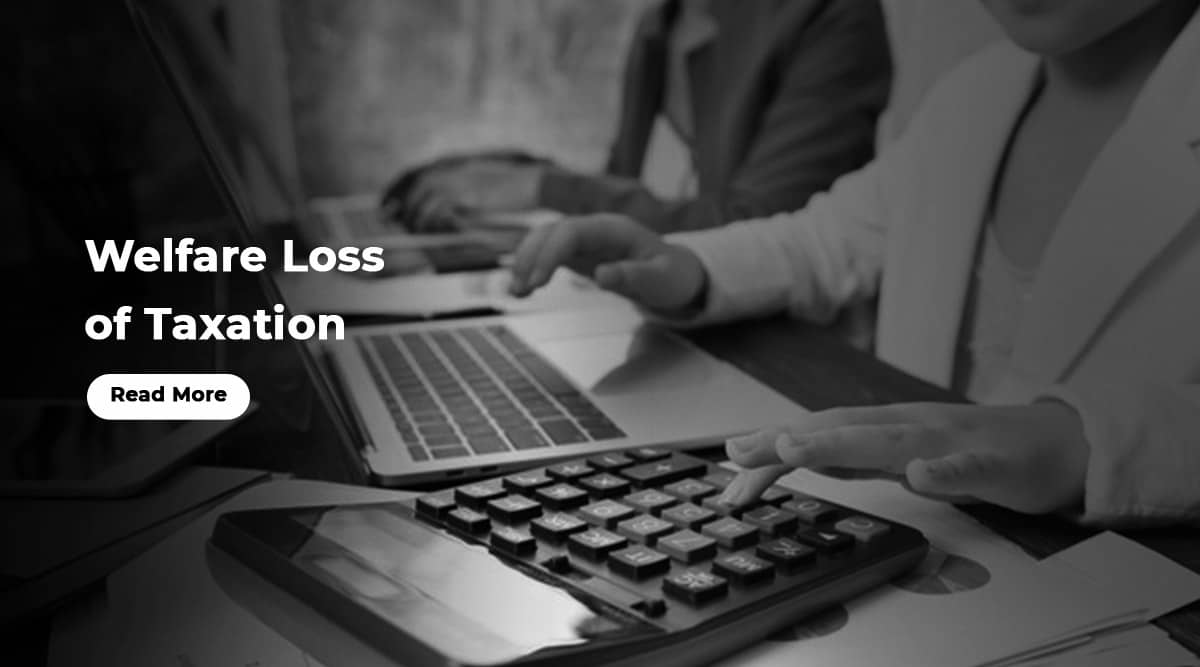 The entire cost imposed on society by levying a new tax is known as the welfare loss of taxation. These costs are incurred as a result of the tax's administration, compliance, avoidance, or evasion, as well as the deadweight losses. Let us understand this concept in-depth.

Individuals pay taxes to governments in order for them to be able to perform their civil operations. Without taxes being paid, governments have a hard time running their countries. Income tax serves as a major source via which the Indian government is able to derive an income. Should people begin to view this tax as a burden and shirk paying it, it can adversely impact the growth of the country.

Welfare schemes are also a possibility owing to the money paid via income tax. In India, presently, there exist over 50 union government schemes that tackle and aid varied sections of society.

Finally, greater access to superior healthcare and education is a possibility owing to taxes paid.

Now, after considering the positives made possible via taxes paid, this article seeks to examine the welfare loss of taxation.

Welfare loss of taxation implies a fall in economic and social well-being owed to the imposition of a new tax. It refers to the total cost that society incurs as a result of the transition in purchasing power from taxpayers to those that authorize said tax.

Such taxes are made up of economically productive activity that is foregone and real resources dipped into either owing to the process of taxation or due to the compensating pattern of workers, consumers and businesses in reaction to the tax.

The government collects taxes such that it can fulfil a number of obligations ranging from funding the provision of public goods to allowing for equitable distributions of wealth to the population. Else they may simply allow for wealth to be transferred from the subjects to those in power. That being said, the process of imposing and implementing taxes is in itself not a free process. The impact owed to the implementation of taxes on taxpayers alters the economic incentives they are the recipients of and in turn impacts their behaviour.

These expenses can be viewed as the transaction costs associated with taxes when looking at public finance.

There are a number of costs that can add to the total cost of taxation. These include but aren’t limited to deadweight losses incurred under the taxed market, welfare losses arising in related markets, tax avoidance costs, administration costs, tax evasion costs and compliance costs.

These costs are derived from the following sources.

Forms of Social Costs of Taxation

Deadweight losses transpire in instances of the market price and quantity of a commodity don’t meet the equilibrium price. This also involves the quantity associated with the costs and benefits of the production and consumption of the good considered within the appropriate supply and demand curves.

When looking at welfare economics, this can be calculated or depicted as the difference that exists between the economic surplus created in its entirety by a market that has or lacks tax and the amount of producer surplus, tax revenue amassed and consumer surplus.

Since taxes create gaps between prices paid by buyers for certain goods and the prices sellers receive for said goods, there exists a deadweight loss in case of any tax. Deadweight losses are known to cause a hike in symmetry to the tax rate.

Similar to avoidance costs, they additionally include the costs of any operations that are partaken in in a bid to avoid the tax in itself. Also included is the cost of activities taxpayers might engage in in order to avoid being detected when they illegally evade taxes.

Income tax, which is the most well recognized tax in India is presently only paid by one per cent of Indians today. Although taxes can be financially draining, they allow for a greater number of amenities to be made available to the public and must be paid.