What is Triple Top Bottom in Technical Analysis? 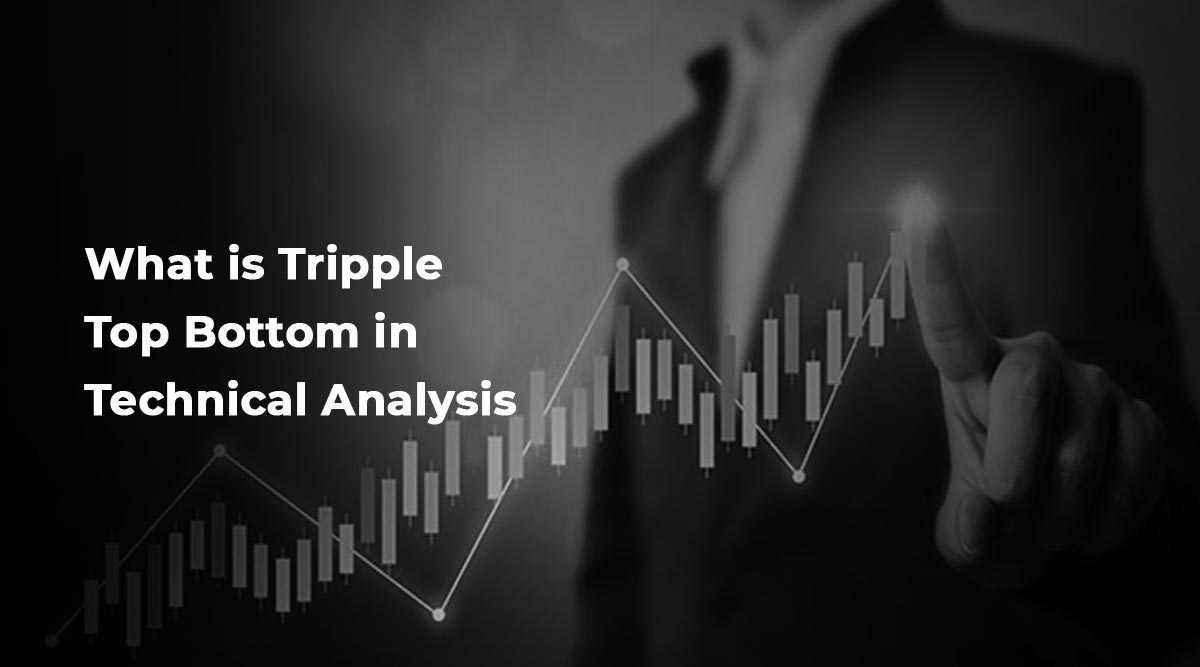 Learn how triple top and bottom patterns are formed, the power struggles they represent and how to identify and interpret price patterns such as these.

Skilled traders, investors and stock market analysts often make use of technical analysis in order to understand the markets better. This form of analysis makes use of several charts wherein price patterns are visible as sequences of price bars. With these patterns, it is possible to look at previous price movements and use them to predict future movements of a given trading instrument.

Popular patterns worth noting include reversal price patterns, continuation price patterns and trendlines. Continue reading to understand just how these patterns are interpreted once they’ve been identified. The triple bottom and triple top patterns will be paid close attention to.

Appearance - These patterns can be viewed as extensions of double bottoms and tops. To put things in perspective, if double tops and bottoms appear as the letter “M” or “W”, the triple top and bottom look like the letter “M” or “W” written in cursive. This simply means that there exist three upward pushes in case of a triple top and three downward pushes in case of a triple bottom.

Understanding the Symbolism - Each of these price patterns is representative of several unsuccessful attempts at breaking through an area of resistance or support. In the case of a triple top, the price takes on three attempts at soaring above an established domain of resistance. Ultimately, it fails and falls back. On the other hand, in the case of a triple bottom, the price attempts to break through a support level on three occasions. Each attempt is unsuccessful resulting in it going back up.

Since this kind of pattern disturbs an uptrend and leads to a trend change directed downwards, its formation has been explained below.

The aforementioned price action indicates the conflict between the buyers and the sellers. While the buyers aim to raise their prices, sellers try to push them down. Each attempt at resistance ordinarily goes hand in hand with decreasing volume right up to the point at which the prices fall through the support level. This occurs owing to the greater extent of participation and related volume. After three attempts at breaking through an established rung of resistance fail, buyers tend to get exhausted and the sellers reign supreme. The price falls which leads to a change in the trend.

Since this pattern disturbs a downtrend and leads to an upside trend change, these formations are bullish in nature. This pattern is also characterised by three attempts at pushing prices via an area of support that are each unsuccessful. Each attempt at resistance ordinarily goes hand in hand with decreasing volume right up to the point at which the prices fall through the support level. After failing, the prices return to their original resistance level.

This pattern too is indicative of the conflict that arises between buyers and sellers. Here, the sellers get exhausted, and the buyers are able to reverse the current trend. The buyers are victorious and get to enjoy an uptrend.

A triple top or bottom is used to indicate the weakening of an established trend and the strength that the opposition begins to gain. Each of these patterns reflects a shift in pressure. In the case of the triple top, this pressure moves from the buyers to the sellers whereas, in the case of the triple bottom, the pressure moves from the sellers to the buyers. Simply put, these patterns visually showcase how power switches hands.

Length of Time – The time frame during which a price pattern lasts is important to consider when attempting to understand a pattern and hoping to forecast future price movements with it. Patterns that evolve over extended time frames tend to be more reliable.

Volatility – This simply means the extent to which a price fluctuates within a price pattern. It gains value when assessing the scope of a price pattern and in the prediction of the magnitude of the ultimate price breakout.

Volume – This highlights the number of units of a given trading instrument that’s changed hands within an outlined period of time.

Understanding How to Interpret Patterns

Three generic rules of thumb that technical analysts bear in mind when interpreting price patterns are as follows.

Identification - To successfully interpret price patterns you must begin by identifying valid patterns in real-time. While they can be fairly easy to pinpoint with historical data, they can be hard to uncover while they are being formed.

Evaluation – Once you’ve pinpointed a pattern you can evaluate it. The duration, volume and volatility of a pattern are worth noting here.

Forecast – The final step is to use the information you’ve gathered in the previous steps to form a prediction or to forecast what the price movements will be in the future.

Technical analysis and the price pattern charts found under it are complex and require expertise, skill and a thorough understanding of the markets. Learn more about the same on the Angel One website.