Why companies are choosing the IPO route 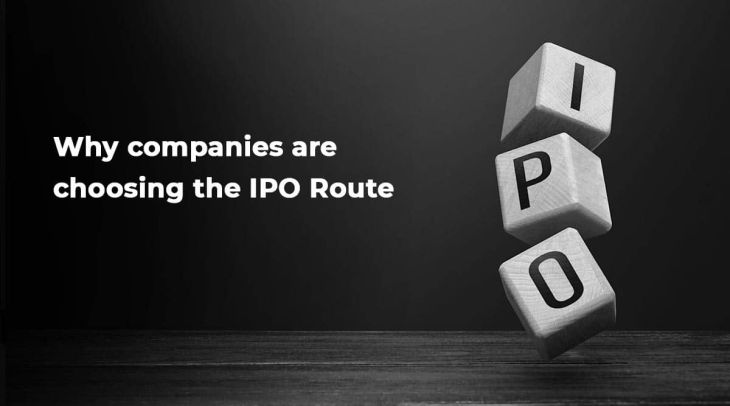 You're hearing about all of these upcoming IPOs from brands that you know of and probably also use - Zomato, where you place your food orders; Paytm that you make payments with; Ixigo that you may have used for a travel booking… you probably also heard about the Burger King IPO last year.

In fact, beyond these names that you might recall or recognise, plenty of IPOs happen in a year. But what is an IPO and why do companies choose to host them?

An Initial Public Offering - abbreviated as IPO - is an offer to the public to become shareholders of the company. There are two broad reasons why a company might choose to host an IPO and within these, 4 possible goals; let's explore:

This is the main reason for companies to host an IPO. Within this, the need for capital might be prompted by a wide variety of goals and purposes. The commonest three among these are debt settlement, expansion & acquisition and managing corporate expenditure. Banks and Non Banking Finance Corporations additionally host IPOs to expand their capital base.

The best way to understand this is to observe a few recent and upcoming examples.

Goal #1 To expand one's capital base

Let's start with the banks - who often want to expand their capital base in order to fund future capital requirements:

Companies might also allow the public to become shareholders in exchange for capital that can get them out of the proverbial hot water.

However, a large chunk of potential investors might feel a bit wary of parking investment capital with a company that needs to be bailed out. They want their capital to grow after all - they don't want to play savior to some corporation. Companies will usually bundle in expansion plans or some other purpose for the IPO proceeds to make their IPO a more appealing investment proposition. Some companies however have so much brand recognition and (sometimes perceived, sometimes genuine) potential that they quite openly say that IPO proceeds will be used for debt settlement.

Have a look at these examples:

Companies might be doing fairly well, but in order to do even better they might need to make a huge investment. The company might choose to pump existing profits into the current business and might want investor capital to fund expansion.

A good example of this is Zomato. The food delivery service provider in its Red Herring Prospectus mentioned that three quarters of  IPO proceeds would go towards expanding the business.

2. When companies host IPOs to allow initial investors and promoters to exit

This also doubles up as goal number 4.

Some IPOs include an Offer for Sale and others are entirely Offer for Sale. Why would investors want to back out? Is it a bad omen?

Not necessarily: the investors might have other priorities, might have met their targets, might want to diversify … it could be anything. These are private equity investors - maybe they found some other exclusive, exciting opportunity to put their capital into.

The much talked about upcoming Paytm IPO is reportedly going to be for an amount of USD 3 billion, out of which USD 1.6 billion will be an OFS by existing promoters and shareholders who are ready to exit.

The small finance bank that we referred to earlier - Fincare Small Finance Bank - is largely OFS. Of the Rs 1330 crore IPO amount, the larger chunk of Rs 1000 crore will be an offer for sale.

CAMS held an IPO in 2020 that was entirely OFS. It was specified in CAMS' Red Herring Prospectus that the entire proceeds of the IPO would be devoted to selling shareholder NSE investments, giving them the opportunity to exit.

If you intend to invest in an IPO, you must definitely:

Always remember to conduct sufficient research and take appropriate precautions when investing. Read our other blogs to develop your understanding of the stock market.

That said, risk is a given in any stock market investment - IPOs included. There is no guarantee of which direction the stock price will move, once the company is listed on the stock market. There is also no guarantee at what rate a price increase - if any - will progress. Always consider your risk appetite and investment horizon before investing.

Is IPO a profitable investment?

There is no way to guarantee whether a stock market investment will be profitable. Investors need to study each IPO-hosting company individually to determine whether the company displays potential for growth.

Is IPO more risky or less risky than buying stocks on the open market?

There is no way to make such a comparison as risk depends on the company and the ability to accept that risk, depends on the investor. However, companies already listed do have historical stock prices that can be used to evaluate potential. Additionally, when purchasing shares on the open market, the investor had the option of setting  a stop loss, that sells off his shares if prices fall below the set stop loss amount. This option does not exist in an IPO.