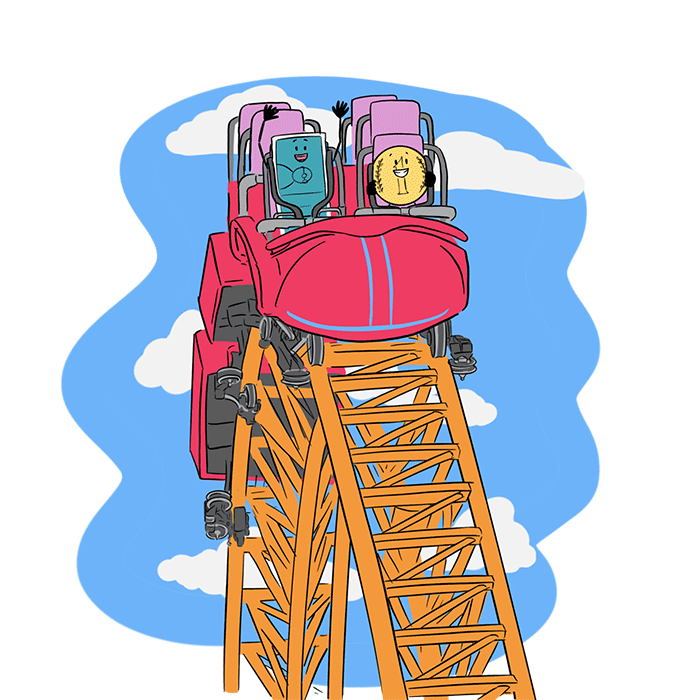 Hello and welcome to another module of Smart Money. In this module, we’re going to be taking a look at bear markets and how you, as a trader or an investor, should navigate them. But before we get into the nitty gritties of bear markets, let’s first direct our focus towards understanding the business cycle and its various phases.

Once we’re done with that, we’ll then try to understand the relationship between the performance of the stock market and that of the various phases of the business cycle. So, without any further ado, let’s begin.

What is a business cycle?

Realistically, the economy of a country cannot possibly expand or contract all the time. There are almost always constant fluctuations with periods of expansion followed by contraction, and then followed again by expansion. This cycle keeps up and goes on in a loop, which is what has prompted economists to label the phenomenon as a ‘business cycle.’ So, a business cycle is essentially the cyclical movement of businesses that make up the economy, as well as the economy as a whole, through periods of upswings and downswings.

That said, a business cycle doesn’t just consist of two phases of an economy - expansion and contraction. Rather, it has as many as four different phases, namely:

Understanding these four phases is essential to be able to appreciate the movement and performance of the stock market. In the next segment of the chapter, this is exactly what we’re going to be dealing with.

Phases of the business cycle: An overview

While we’re on the topic of understanding the four phases of a business cycle, let’s first focus on the easiest phase - expansion - before going through with the others.

During the expansion phase of a business cycle, an economy’s GDP witnesses a rise. Depending on the prevailing circumstances, the increase in GDP can either be slow, moderate or rapid. Also, in the expansion phase, people are generally left with more disposable income. This is then used to purchase more goods and services.

This increase in consumption of goods and services drives up consumer demand. This prompts businesses to increase their production and supply to match the increasing levels of consumer demand. In addition to that, companies are also likely to hire more employees, leading to even higher production. Profits increase, as a result, and encourage further capital expenditure and creation of jobs.

The peak is the phase in a business cycle where the GDP of an economy is at a high point. Everything from economic activity and consumer demand to employment and production are at their highest levels. Although peak is a favourable phase, if it lasts for a long enough time, there’s a risk of inflation.

Since the disposable income of people is at the highest at this point, the prices of goods and services will likely rise, causing a drop in the value of money. And because the economy and the GDP have already reached their high points, there is little scope for further economic expansion. This situation slowly declines into a recession.

When the Gross Domestic Product (GDP) of an economy declines for two quarters of a year simultaneously, the economy is officially considered to be in recession. Recession has a multi-fold effect on the economy. The lack of economic activity during a recession essentially prompts people to save up rather than spend, which lowers consumer demand.

To match the falling demand, manufacturers and service providers tend to scale back their operations, thereby lowering their profits. This, in turn, pushes companies to cut back on spending by laying off employees. With rising rates of unemployment, people tend to spend even less, thereby feeding the vicious cycle of recession.

Recession, if left unchecked, can end up turning into a depression. In this phase, the economy bottoms out and touches its lowest point. Here, consumer spending and income levels are at their lowest, unemployment is at its peak, and the supply of goods and services reach levels of overproduction.

Depressions in the economy can last for either weeks, months, or sometimes for even years. A good example of this is The Great Depression in the 1930s, which lasted for over 3 years, spanning a total of 43 months altogether. And in this phase, since the economy has hit rock bottom, it stops declining further and slowly starts to recover again, leading to the expansion phase. 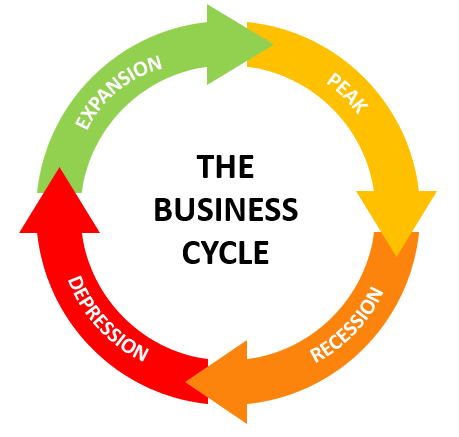 How does the market react to the different phases of a business cycle?

Response during the expansion and peak phases

During the expansion phase, almost all the major sectors of the stock market tend to either outperform the broader market or perform in an adequate manner. The financial, consumer discretionary, real estate, and manufacturing sectorS usually tend to outperform during this phase due to the lower levels of interest rates. On the other hand, healthcare, energy, utilities, FMCG, and other defensive stock sectors tend to underperform due to the demand for their products being fairly stable throughout.

All of the sectors that do well during the expansion phase also tend to continue their performance in a similar manner during the peak phase. That said, there are a couple of sectors like information technology and communication services that generally outperform the broader market during this period. This is simply because of the fact that IT and IT related companies typically expand their business and make capital expenditures during economic peaks.

Response during recession and depression

During the recession phase, consumer discretionary is one of the few sectors that take the maximum brunt. As an increasing number of people are looking to save rather than spend, the sector tends to underperform by quite a bit due to lower levels of consumer demand and spending in the luxury or discretionary segment. The IT sector also takes a hit due to falling profit margins. That said, defensive sectors like healthcare, FMCG, energy, and utilities have a tendency to perform really well during this phase. Since the products and services falling under these sectors are necessities and are therefore unavoidable, they generally perform better.

However, nearly all sectors get hit hard during a depression, with the real estate sector  often underperforming the most. Only the most defensive sectors, which have a long history of staying stable under all odds, tend to perform well during the depression phase of a business cycle. Healthcare and FMCG are two of the only defensive sectors that continue performing well even during this phase. In addition to this, businesses in the utilities sector, particularly electricity distribution companies, also tend to do quite well.

That’s it for this first chapter of this module of Smart Money. As you’ve seen, the stock market reacts to these cycles. Sometimes, prices of stocks are on an uptrend, and at others, they tend to fall. This gives rise to bull and bear markets. In the next chapter, we’ll delve into the concept of bear markets and try to make sense of what they actually entail.

What are bear markets?

Hey, I have discovered this amazing financial learning platform called Smart Money and am reading this chapter on Business cycles and markets. You can explore too.