Introducing the value chain 7. Market share and why it matters 8. The BCG matrix

What are growth and returns? 9. Is your investment 'sustainably differentiated' from competition? 10. How to pick stocks of companies with the right strategy?

Is your investment 'sustainably differentiated' from competition? 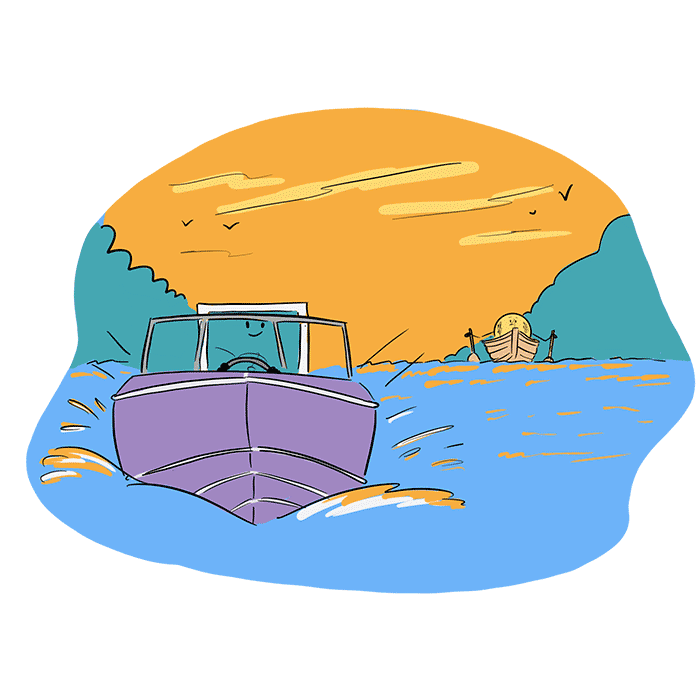 Remember Yahoo? If you’re a millennial who was hitched on to the internet from the early days of the dial-up, you probably do remember the purple logo with an exclamation mark at the end all too clearly. But when you think about it, when was the last time you actually used Yahoo or any of its products? If we’re right, ever since Google swept into the market, you’ve probably not turned to Yahoo for any assistance, isn’t it?

But it wasn’t always like that. Back when Yahoo was launched in the 1990s, it was the unassailable market leader in the internet services space. Yahoo’s portfolio of services was impressive, and quite frankly, unchallenged. It included a web portal, a search engine, a directory, email services, news, finance, groups and Q&A forums. Yahoo even supported online mapping, video sharing and fantasy sports, among other things. For a company in the 1990s to venture into the very same spaces that today’s tech giant - Google - is lording over, Yahoo was doing remarkably well in the late 20th century.

Today, however, Yahoo is barely spoken of, and mostly forgotten. So, what went wrong enough to push the monopolistic internet giant of the 90s into near oblivion? As it turns out, quite a few things. Let’s jot them down to get a broader idea of why Yahoo failed.

So, what is the moral of this story? Well, the crux is that it’s not enough for a company to be a leader now. What matters is how well-equipped it is to sustain that competitive advantage over the long term. As an investor, this is one of the key aspects you should be looking into when you’re contemplating investing in a company.

“Is your investment sustainably differentiated from the competition?”

And how do you go about doing that? Well, you start by understanding what it means to be sustainably differentiated from the competition. So, let’s begin by decoding that.

What is sustainable differentiation from the competition?

Sustainable differentiation is a phenomenon that allows a company’s products and/or services to stand out from its competition over the long run. It is a process that businesses use to ensure that they remain the first choice for consumers in a saturated market.

Sustainable differentiation is the foundation for sustainable competitive advantage. Without consistently ensuring that their products and/or services continue to remain differentiated in the right way, businesses cannot remain ahead of the competition in the long run.

Although most businesses get what the idea of differentiation is all about, they often tend to fail spectacularly when it comes to executing the concept. Truly sustainable differentiation needs to be hard to replicate, and simultaneously, it must add value to the consumer group. More often than not, companies only check one of these boxes.

Value adding, but easy to replicate

Take Yahoo’s case, once again. Its product differentiation added value to the end user, but it was not that tough to replicate.

Tough to replicate, but no value addition

Conversely, remember the case of New Coke, from Coca Cola? We had discussed the incident in our earlier chapter titled ‘What is strategy?’ Coca Cola’s New Coke was a classic case of product differentiation gone wrong. It was not easy to replicate, but in the end, it added no value to the consumer. Understandably, it failed.

So, what is a case of sustainable differentiation done right?

Apple - that’s a case of sustainable differentiation done just right. The company’s top products, namely the iPhone and the MacBook - check both the boxes. They are not easy to replicate, giving Apple a lead over its competition. And they definitely add value to the end user. It’s no wonder then that once you turn into an Apple loyalist, there’s almost no going back. With this kind of sustainable differentiation, it’s likely that the tech giant will continue to remain ahead of its competition for the foreseeable future. And that is the kind of differentiation you need to look for before putting your money on a stock for the long term.

Indicators of sustainable differentiation from the competition

So, now that you know what you need, how do you go about finding it? There are always indicators that can help. You could look at the strategies that the company you’re interested in employs. Typically, there are some key strategies that can help businesses remain ahead of the competition over the long term, and some indicators that tell you a business is here to stay.

Let’s take a closer look at some of them, so you know what to look for.

Building a powerful brand with a strong identity takes time, investment and a host of other resources. Companies that are sustainably differentiated from their peers possess a unique brand identity that is backed by brand loyalty among the target group. Customers automatically prefer these brands over their competitors, and that is a golden ticket straight to sustainable differentiation.

Businesses also need to constantly and consistently innovate in order to ensure they are above the competition. One-hit wonders won’t do the trick. Often, businesses limit their differentiation to one product and ride on that high for a while. But to consistently remain ahead, innovation is key. As an investor, this is one area you want to look at before putting your money one a stock. How future-ready is the company? That is something to check out.

Operating on a small scale doesn’t leave room for much differentiation - either on the product front, or on the pricing. But once a business has grown up to a sizable scale, it can afford to penetrate the market by lowering its prices. Economies of scale and efficiency of operation are both of relevance here. Eventually, such companies could also build a loyal consumer base and accumulate enough pricing power to increase prices without losing their user base.

When a company possesses certain strategic assets like patents or the rights over exclusive processes, that’s another way to achieve and maintain a sustainable edge over the competition. Other examples of strategic assets include trademarks, copyrights, long-term contracts and domain names. These are not replicable, and if they add value to the user, the business in question has a good chance it may outrun the competition.

Barriers to enter an industry often lead to monopolistic or nearly monopolistic markets in the economy. These barriers could be in the form of governmental regulations, high investment costs, massive competition with existing, established players, or a mix of these factors. Some examples of industries with high entry barriers include aviation, pharmaceutical manufacturing, and even cable television. If a business has successfully established itself in a space with high entry barriers, it may also manage to be sustainably ahead over the long run.

Strong financial fundamentals do not guarantee sustainable differentiation. But without it, no business can hope to stay ahead of the competition in the long run. High debt levels, stifled cash flows, and mounting liabilities are never a good sign. Liquidity, access to working capital, and solvency are all essential elements to look for if you want to collaborate evidence of a company’s competitive advantage over the long run.

A product or a service that remains unchanged is an easy target for competition. Businesses need to focus on obtaining feedback on their products and constantly evolve their offerings, so they can keep pace with the changing needs of their consumers. ‘New and improved’ is generally a good tag to have, if that’s what the target market craves. So, keep an eye out for how adaptable a company’s products and services are, before you invest in it.

And lastly, there is no replacement for sound management. The people at the top run the business, and it’s important that they’re open to futuristic thought. Merely remaining grounded in the past will do no business any good, particularly if we’re discussing lasting competitive advantage. The best players in any business are the ones that are open to thinking of the future. And it’s vital that the management is actively engaged in this line of thought.

This sums up sustainable differentiation, and how you can look for it in an investment prospect. The indicators discussed above are not exhaustive, nor are they sufficient. They are merely the key markers to look for. No company can have all of them, all the time. But the leaders of today, and more importantly, of tomorrow, are the ones that strive to check all these boxes consistently.

What are growth and returns?

Hey, I have discovered this amazing financial learning platform called Smart Money and am reading this chapter on Is your investment 'sustainably.... You can explore too.