Trading orders 101: Everything you need to know

Chapter 3 / 11
1. The difference between a single transaction and a market 2. What really happens when you buy or sell an asset through the market?

What are markets? 3. The importance of liquidity 4. The meaning of 'last traded price'

Is there always going to be a buyer for what you are selling? 5. What are the different types of orders? 6. Important numbers to keep in mind when placing orders

Types of orders 7. Market depth and price bands 8. What to do when holding an illiquid asset?

Types of buyers and sellers 9. Surviving technical issues: What happens to orders when NSE/BSE have execution issues? 10. 10 things to check when placing orders

A checklist for traders when placing orders Glossary: 20 terms you should know before placing an order in the market

Trading orders 101: Everything you need to know

The importance of liquidity 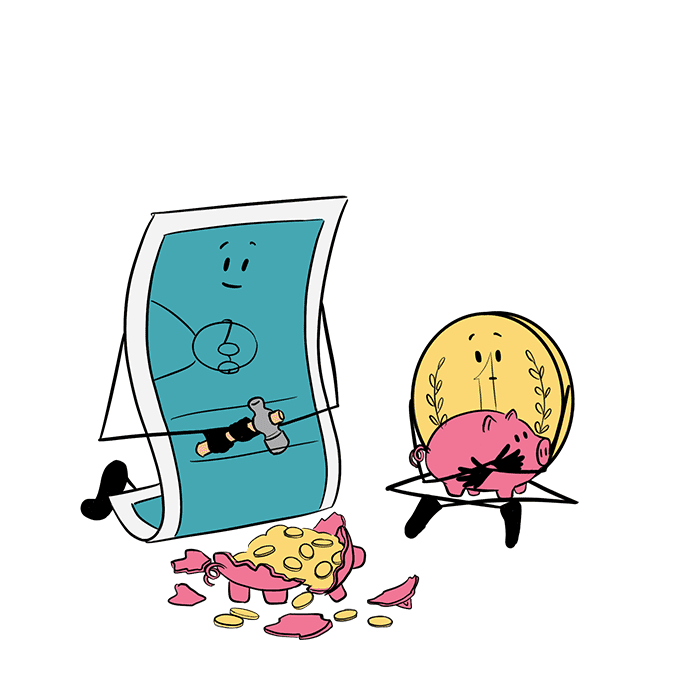 Meet Adi and Veer. They’re brothers, they’re both working professionals, and they each earn a comfortable income that supports a variety of long-term investments. While they have a great deal of reasons to be happy about, today’s a grim day. Their father has been hospitalized for an emergency procedure. “Small thing,” the cashier behind the reception counter says, “but I’ll require you to pay an advance of Rs. 2,00,000 upfront.”

Adi panics. It’s the last week of the month, and until the first of the next month comes along, he doesn’t have much disposable income in his hands. His bank balance reads Rs. 12,000. All of his earnings are locked up in long-term investments like a plot of land, long-term bonds, and his own house.

Veer, on the other hand, is cool as a cucumber. He opens his stock trading app, and with a few clicks, he has the required sum credited in his bank account by the trading day. With the advance paid and their father’s treatment a success, the two brothers sit down for a chat over a cup of tea.

That’s when Veer broaches the subject of liquidity with his brother. And that’s just what we’re going to be touching upon in this chapter. Let’s start by taking a look at what the liquidity meaning is.

What does liquidity mean in the market?

Liquidity is basically the ability to convert your investments into cash quickly and without much delay. The faster you’re able to convert your asset to cash, the more liquid it is said to be. That’s not all. With high amounts of liquidity, it is far easier to find the price at which you wish to buy or sell an asset, without having to make compromises to make it more attractive.

Now, the concept of liquidity applies to the stock market as well. Buying and selling certain stocks in the market is far easier and faster than trading others. In some cases, the transaction gets executed almost instantaneously, as well. Such stocks are termed to be highly liquid in nature.

Here’s a snapshot showing the most active securities on the NSE.

On the other hand, the converse is also applicable. There are a group of stocks that don’t enjoy such favourable treatment. Buying and selling them is not easy. It may take days, or sometimes even weeks to sell your holding if your stocks are not liquid. These stocks are generally termed to be illiquid in nature. Penny stocks are widely known to possess lower levels of liquidity compared to other stocks. Later in this module, we’ll look into what you can do if you have an illiquid stock in your portfolio.

The most liquid markets

The foreign exchange (forex) market possesses extreme levels of liquidity, which makes buying and selling currencies a supremely quick affair. In fact, the market is so liquid that transactions generally get executed in microseconds and milliseconds.

That said, not all currency pairs enjoy such high amounts of liquidity. Only the major currency pairs like GBP-USD, EUR-USD, and USD-JPY get to enjoy the distinction of being among the most liquid assets in the world.

Planted firmly at the second position is the financial market that we know and love - the stock market. The Average Daily Trading Volume (ADTV) of equities in the National Stock Exchange (NSE) comes up to around hundreds of crores every day, which means that hundreds of crores of equity shares are bought and sold each day.

However, as with the currency market, not all stocks get to enjoy high levels of liquidity. Generally, only large-cap stocks and mid-cap stocks tend to be highly liquid in nature.

Why is liquidity important?

To understand the importance of liquidity, let’s revisit the story of Adi and Veer that we saw at the beginning of this chapter. Take the case of Adi. It would take him no less than a week to convert his plot of land into cash. This is because land is an asset with a low level of liquidity. Now, look at Veer instead. It took him only around a day to sell his stocks and have the cash credited to his account. What this tells you is that stocks are highly liquid. That said, not all stocks are highly liquid, which we’ve already seen quite extensively in the previous segments of this chapter.

Let’s now take a look at the importance of liquidity when you’re dealing with the stock market.

1. It allows for quick transactions

A transaction in a stock that’s highly liquid, whether it is a buy order or a sell order, usually gets executed within a matter of a few minutes instead of hours or days. And since liquidity reduces the turnaround time, you can carry out multiple transactions in the same day without having to wait for excruciatingly long periods.

2. It eliminates the need to compromise

Assume that you’re in possession of a stock that’s not very liquid. You bought the share for Rs. 20 and you wish to sell it for Rs. 25. However, due to the lack of liquidity, there are not many buyers who are willing to purchase the stock for Rs. 25. And so, you wait for a few days to try and sell it at the price that you want.

However, there are still no takers. Frustrated with this, you compromise on the price and end up bringing the price down to Rs. 22. Again, there seem to be no takers. By now, your need for the cash has also increased. Therefore, as a last ditch effort to make the stock attractive, you end up offering it for Rs. 19. This finally gets the buyers interested and the trade gets executed.

See how the lack of liquidity made you cut the price of the stock down to make it attractive, thereby leading to a loss? This almost never happens with a highly liquid stock. You generally get the price that you ask for, or at least a price that’s attractive enough, without having to make any compromises whatsoever.

How do you identify if a stock is liquid?

One of the best ways to check for the liquidity of a stock is to take a look at the demand and the supply. Here’s a screenshot showing this information for Tata Steel, which is one of the most liquid stocks on the NSE.

See how the traded volume is over 3 crore shares? And how the total buy and sell quantities are also high? That’s the sign of a liquid stock.

By contrast, take a look at the same information for Usha Martin Education & Solutions.

The traded volume is just over 11,000. And the total buy and sell quantities are also much lower by comparison.

This gives you a fair idea of the liquidity of the stock you want to buy or sell. You can also find this information in the user interface provided by your stockbroker on their trading platform. Make sure you take a look at how liquid or illiquid a stock is before you purchase it, because selling illiquid assets can be highly challenging.

And, that’s about it for our chapter on liquidity and its importance. In the next chapter, we’re going to be taking an indepth look at the term ‘last traded price’ to try and understand what it actually means and what kind of an influence it has on stock prices.

Hey, I have discovered this amazing financial learning platform called Smart Money and am reading this chapter on The importance of liquidity. You can explore too.