What are bear markets? 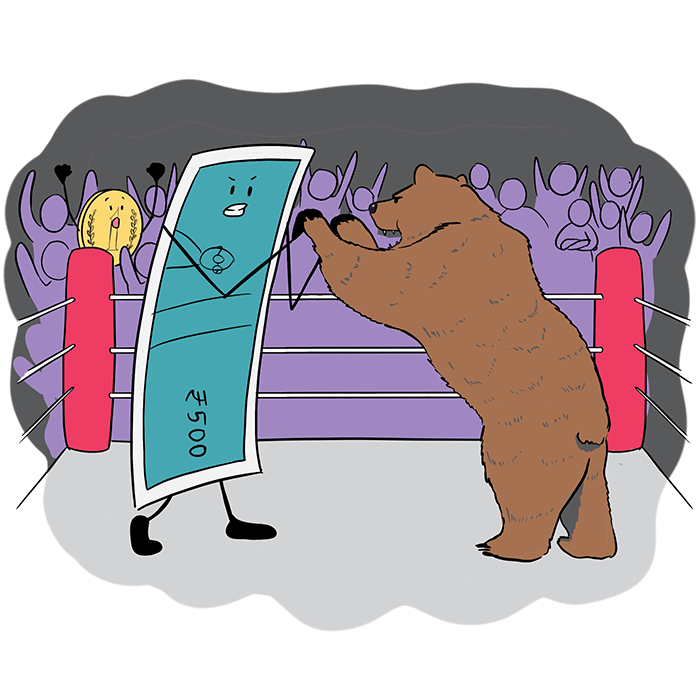 What goes up must come down, and nowhere is this more true than in the economy. As the famous British-American investor, John Templeton, put it so succinctly, “There will always be bull markets followed by bear markets followed by bull markets.” So, simply put, markets rise, and fall, and rise again. This cycle continues forever, practically speaking. While even the most inexperienced investor is aware of this fact, there is some related jargon that can be confusing if you’re not familiar with regular stock market vocabulary.

One such term is a ‘bear market.’ Sure, you may have heard of it over the course of learning about the markets. But what is it? And what should you, as an investor, know about this market phase?

Come, let’s find out by beginning with the bear market meaning.

What is a bear market?

A bear market is a phase in the stock markets that is marked by prolonged and consistent declines in the prices of the stocks listed on the exchanges. Negative investor sentiment fuels shareholders to sell their holdings, thereby making it a seller’s market, characteristically. In other words, investors flee the market. Here are some of the common defining markers of a typical bear market.

In the Indian stock market as well as in the global markets, there have been many notable bearish phases over the years. We’ll look into these historical bear markets more closely in the coming chapters. The most recent bear market was the crash of 2020, following the outbreak of the COVID-19 pandemic. While there is always a trigger of some sort, bear markets don’t occur overnight. They go through a series of phases, in most cases. That’s just what we’re going to be looking at in the following section.

The phases of a bear market

During this phase, investor sentiment is generally at a high level. Investors typically book profits in response to high prices, and slowly, they begin to drop out of the market. The strength of sellers is thus on a rising streak, and fewer investors are interested in buying stocks during this phase.

Capitulation essentially refers to investors selling out and migrating out of the markets massively. It is at this point that stock prices start to fall noticeably. Trading activity dips on the buying end of the spectrum and, depending on the economic conditions, corporate profits also begin to decrease. Panic sets in among investors, leading to peak bear market conditions.

In this phase, speculators start to enter the bear market. They project market patterns and try to determine when the markets could rally. Owing to speculation activity from these traders, the bear market sees a rise in trading volume and correspondingly, in the prices of some  stocks. The nature of the rally - whether it is temporary or lasting - depends on the strength of the speculators.

This is the last phase of a bear market. Here, the prices of many stocks may continue to fall, although not as rapidly as they did in the capitulation phase. The decrease in the intensity of price drops draws in buyers who suspect a trend reversal. And as more buyers enter the market, the bulls gain strength and signal the end of the bear market.

How do you recognize a bear market?

Here are some signs that help you recognize a fast-approaching bear market.

Bear markets are often characterised by rising rates of unemployment. Economic slowdowns typically lead to poor profitability for the companies in various cyclical sectors, and this, in turn, not only brings down stock prices but also increases the rate of layoffs. The resulting layoffs further fuel the bear market, because many retail investors are left with no surplus money with which to fuel their investments.

Bear markets often follow asset bubbles, where the prices of assets like stocks, gold or real estate rise rapidly and tremendously, without any rational support from a corresponding increase in the asset’s true value. They also tend to follow periods of irrationally positive investor behavior, because a contraction almost always comes in close at the heels.

You can also recognize a bear market by its most defining feature - a fall in prices. Stock prices fall, thereby leading to market slumps where more people begin to panic, leading to an increase in sell-offs. The cycle continues until the bear market reaches its saturation level and begins to reverse again.

Bull vs. bear: Two side of a coin

The market moves through bear markets, sideways markets and bull markets in continuous succession. A bull market is a period of rising prices and increasing strength among buyers, which is exactly the opposite of what a bear market characteristically is. This makes bull and bear markets two sides of the same coin.

Here’s a quick preview of the key differences between bull and bear markets.

This sums up the core phenomenon that marks a bear market. Bear markets that have occurred throughout the years gone by have all taught investors valuable lessons. This is just what the coming chapters will discuss, so you can benefit from the practical information that the bear markets of the past have taught us.

Hey, I have discovered this amazing financial learning platform called Smart Money and am reading this chapter on What are bear markets?. You can explore too.