Chapter 3 / 11
1. Techniques of Investment Analysis 2. What is technical analysis?

What charts are used in technical analysis. 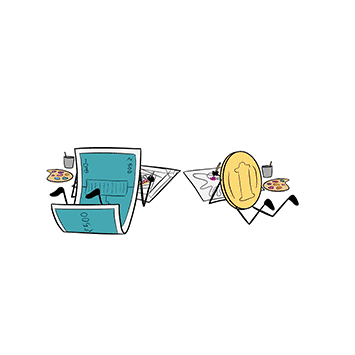 Say there’s a stock trading in one of the stock exchanges. Throughout a single trading session, the stock would likely witness innumerable fluctuations, both positive and negative, in its price and volume. In such a case, how do you record such large volumes of data? Sure, you can record all the data in a tabular format, but reading through them would quickly get cumbersome. Here’s where technical analysis charts come in handy.

Technical charts are basically media that represent data in a graphical format. They make it easier to read and draw conclusions from huge volumes of data. Technical analysis charts are so versatile that they can accurately represent the price and volume movement of a share for any specific time period, ranging from one trading day to several years on end.

Charts can help you understand how the price of a stock moved over a particular period of time by plotting four key price points. For a chart that shows the price movements during one trading day, these are the four important points.

The ability to accurately and comprehensively summarise the price action of a stock is the primary reason why technical charts are considered to be the core of technical analysis.

Now that you’re aware of the importance of charts, let’s take a brief look at the types of charts that you’ll be typically using for technical analysis.

One of the most basic charts used in technical analysis, the line chart is used to depict the trends in the price of a particular stock or index over a certain period of time. This kind of chart is very useful when it comes to determining the overall trend of a stock. With one look at a line chart, you can identify the price or volume movements of that stock.

To understand this kind of chart a bit better, let’s look at the 52-week line chart of Infosys Limited. 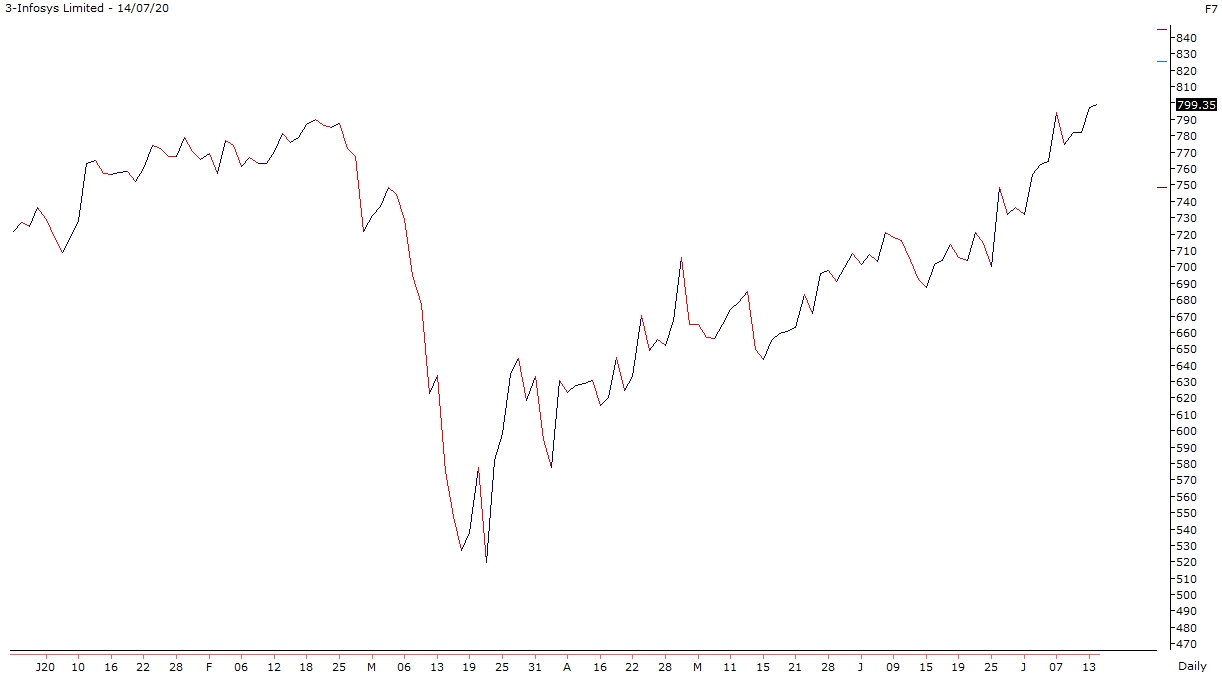 A bar chart is more useful to a trader involved in technical analysis. It depicts these four price points of a stock for a particular period of time easily.

A bar chart is generally depicted as a thin central vertical line with two horizontal lines emerging from it, one on the left and one on the right. Here’s how it looks and what the lines mean.

Now that you know what a bar looks like, let’s take an example to understand it better. Say the opening, lowest, highest, and the closing price of a stock are as follows.

The bar for the given data would look like this. 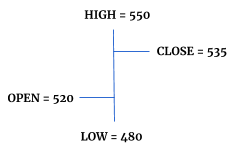 Since the closing price of the stock is above the opening price, the stock is said to have moved positively. And, the bar is represented either in blue or in green.

Now, let’s take up another instance where the closing price is lower than the opening price. The stock prices are as follows.

Since the stock moved negatively, the bar is depicted in red.

Another point to note when reading through a bar chart is that the length of the bar changes according to the price range. The difference between the lowest price and the highest price of the stock is the price range. Therefore, the longer the line, the larger the range.

For the sake of continuity, we’ll take a look at the 52-week bar chart of  Infosys Limited. 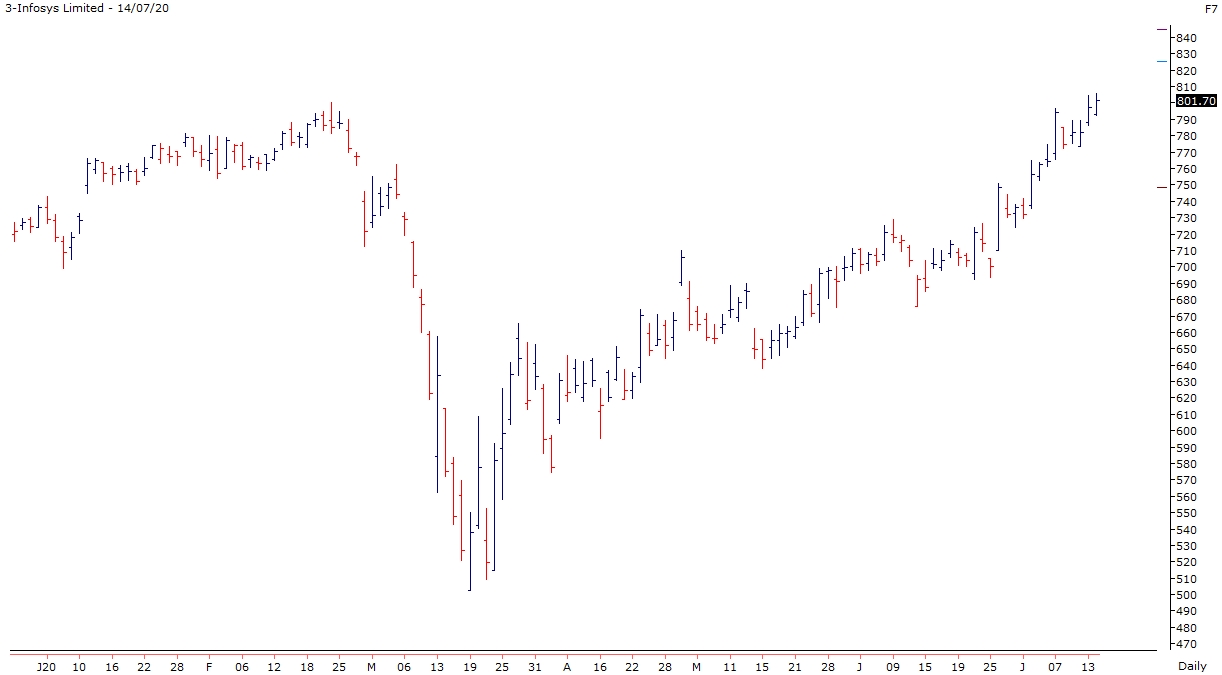 The candlestick charts, which first originated in Japan, are what traders involved in technical analysis primarily use. Owing to these Japanese roots, many candlestick chart patterns bear Japanese names like doji and marubozu. We’ll look into the details in the upcoming chapters.

The structure of a candlestick is quite similar to that of a bar chart. The only difference is that the candlestick uses a rectangular body to depict the opening and closing prices of a stock instead of the two horizontal protrusions. Here’s an example of two kinds of candlesticks, depending on whether the opening price is higher or lower than the closing price. 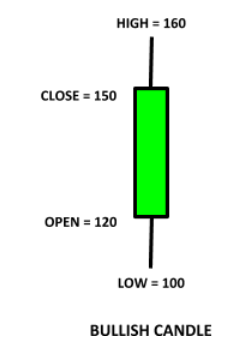 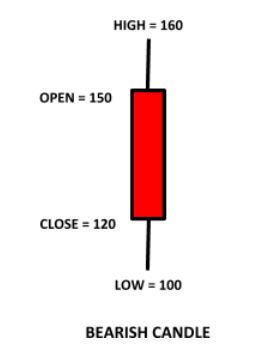 Candlesticks and candlestick charts are explained in further detail in the next chapter.

Renko charts, invented by the Japanese, rely on and display only price changes. The origins for the name of these charts can be traced back to the word renga in Japanese, which means bricks. The charts themselves look like a series of bricks arranged in different patterns. Take a look at a Renko chart and see for yourself how the data points are represented by price bricks.

Since Renko charts do away with minor price changes, trend spotting becomes easier. They are also very useful for technical analysis since they help identify support and resistance levels easily.

Just like your regular candlesticks, the Heikin-Ashi candles also use four data points - the close, the open, the high and the low. But the formulas used for Heikin-Ashi charts are as follows.

See how the Xs and Os are stacked on top of each other? If the price continues to rise, the column of Xs continues to grow. In case the trend reverses, a new column of Os enters the picture. Point and figure charts are useful if you want to determine entry and exit points for your trade.

We’ll get into the details of candlesticks and the chart patterns they form in the upcoming chapter. Learning how to read these chart patterns can help traders like you make sense of price movements easily. Keep reading to find out more.

What does technical an...

Hey, I have discovered this amazing financial learning platform called Smart Money and am reading this chapter on What charts are used in technical analysis.. You can explore too.