Types of debt instruments 3. What are government securities? 4. What are corporate bonds?

Are debt funds for you? 7. Liquid funds 8. Short and medium term funds

Benefits of investing in debt Glossary: 20 terms you should know about the debt market 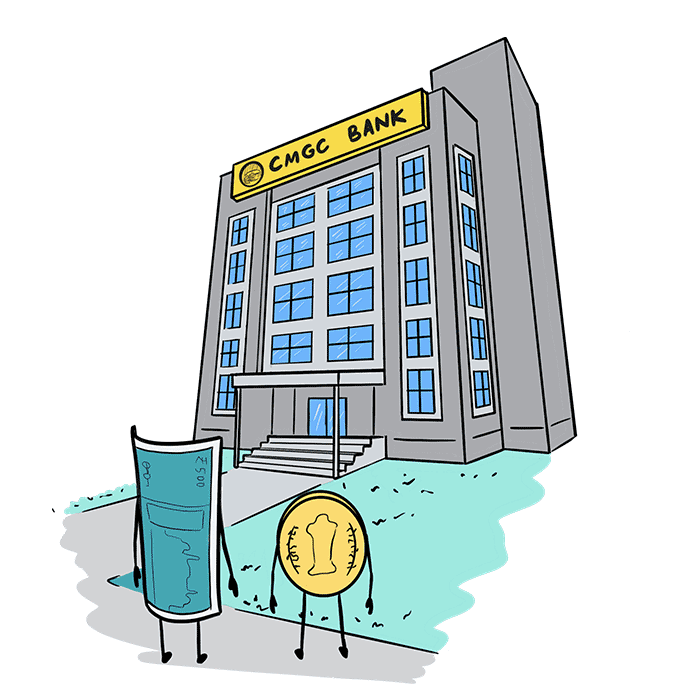 Debt. That’s a word you may have no doubt heard of several times, isn’t it? Perhaps you may have grown familiar with the concept of debt during your school days, if you’d studied accountancy. Or perhaps, you may have become associated with the word much later in life, after you earned your first paycheck.

Those who are aware of what debt is often try to steer clear of it, while those who drown in debt often have no idea about how debt works. Let us introduce you to Bhola, who, unfortunately, is on the verge of belonging to the latter category. Here’s his story.

At 23, Bhola earned his first paycheck of Rs. 15,000 working in the sales department of a well-established, multinational company. In the company’s hierarchy, Bhola was still at the lower rung. But for him, his first salary was a huge reason to celebrate. A week later, he received a call from a bank, offering him a credit card.

Bhola was immediately enamored by the idea of buying first and paying later, and he signed up for the card even before he knew exactly how it worked. A few months passed, and soon, Bhola wanted to purchase a shiny new bike. The bike he had his eye on cost around Rs. 1 lakh, but Bhola didn’t have that kind of money in hand. So, a friend of his suggested he take a loan. Following through on that advice, Bhola approached a bank and applied for a personal loan to finance his purchase.

The bank looked into Bhola’s credit score, checked his background, and approved his loan at an interest rate of 12%. Since it was his first time availing a loan, Bhola was careful to ensure that he repaid each installment promptly. A few years down the line, Bhola had managed to save up some money, and he decided it was time to buy a house of his own. Once again, he opted for external financing.

This time, however, he borrowed a significant amount - Rs. 20 lakh, to be specific - with an interest rate of 9%. By this time, Bhola’s income had grown to Rs. 30,000. For the first 3 years, he managed to repay his dues on time. However, as the fourth year came around, Bhola faced an expensive medical emergency that left him with no funds to repay his home loan. That was the beginning of a downward spiral for Bhola.

He borrowed money from friends to repay his home loan. And then, he borrowed more money to repay his friends. The vicious cycle he was caught up in gave him no respite. That’s when Bhola realized the perils of debt.

So, does Bhola’s story have a happy ending? Unfortunately, like the stories of most people drowning in debt, it does not. That’s why it is important to learn the details of debt early on in your financial journey. When you do that, you’ll not only see how debt can be detrimental to your finances, but you’ll also be introduced to how, when used right, debt can help you make money.

Curious about that? We’ll get to it, all in good time.

For now, let’s begin at the basics.

In its simplest form, debt is a sum of money that one party borrows from another. The borrower can be an individual, a company, a bank, or even the government. Similarly, the lender can also be an individual, a company, or a bank. The sum of money borrowed is to be repaid as per the terms and conditions of the contract between the lender and the borrower. Irrespective of the nature of the lender and the borrower, any kind of debt has three major components.

The tenure is the period over which the borrower repays the money to the lender.

The principal is the amount borrowed. This is the basic amount that the borrower needs to repay the lender.

The interest is an additional fee collected by the lender, in return for giving the borrower the flexibility to repay the amount borrowed slowly, over a longer tenure.

The different types of debt

Debt is a simple enough arrangement, isn’t it? One person borrows money from another, and then repays it over an agreed period of time with (or without interest). But here’s where things get interesting. Depending on different aspects, like the nature of the borrower or the lender, the instrument used to borrow, or the purpose of borrowing, debt can be of different kinds.

Let’s take a sneak peek into what some of the most common types of debt are.

Sometimes, lenders require a collateral security that they can fall back on in case the borrower defaults on the loan. For example, say you want to purchase a house, and you approach a bank for a home loan. The bank lends you the amount, and in return, secures the house you purchase as collateral for the loan. In the event that you fail to repay the loan, the bank can seize the asset and shield themselves from the loss arising on account of the default. These loans, which are backed by collaterals, are secured debts.

This one should be easy enough to figure out. A debt that is not backed by any collateral is known as an unsecured debt. In the case of unsecured debt, the lender relies on good faith and the borrower’s credit history as assurance that the loan will be repaid. Some examples of unsecured debt that you may have come across in everyday life include personal loans and credit cards. This leads us to the next kind of debt.

This is the debt that accumulates as the outstanding balance on a credit card. Over time, as credit card users make purchases that they intend to pay for later, the amount of balance outstanding on the card increases. Generally, credit cards come with a due date, and if the borrower repays the amount of credit utilized within that date, no interest is charged. Late repayment, however, will carry interest.

Corporate debt, as you may have deciphered from the name, is debt that is accumulated by companies - both private and public. Companies require money for various purposes like business expansion, regular operations, or even a business process overhaul. While some companies resort to bank loans to fund these requirements, others issue debt instruments like bonds. In both cases - whether companies opt for loans or issue debt instruments - they will need to repay the corporate debt.

So, that sums up the basics of what debt is all about. More often than not, when you think of debt, you tend to place yourself in the position of a borrower. But switch it up a little and think of debt from the position of the lender. Can you lend to companies? Can you lend to the government? It turns out that you can. In fact, that’s what the debt market in India is all about. Just like the stock market, the debt market offers various opportunities for individual and institutional investors. Head to the next chapter to learn all about the debt and stock markets.

Hey, I have discovered this amazing financial learning platform called Smart Money and am reading this chapter on What is debt?. You can explore too.