Introducing the statistics of risk

Introducing the statistics of risk 5. The variance and covariance matrix 6. The correlation matrix and the variance of a portfolio

What is market risk? 7. Decoding expected returns and estimating the portfolio range 8. How to optimize a portfolio to manage risk?

How to account for risk when building a portfolio? 9. Introducing Value at Risk (VAR) 10. Avoiding vs. reducing risk

The investor's guide to reducing risk Glossary: 20 terms that will introduce you to risk and the statistics involved

Introducing the statistics of risk 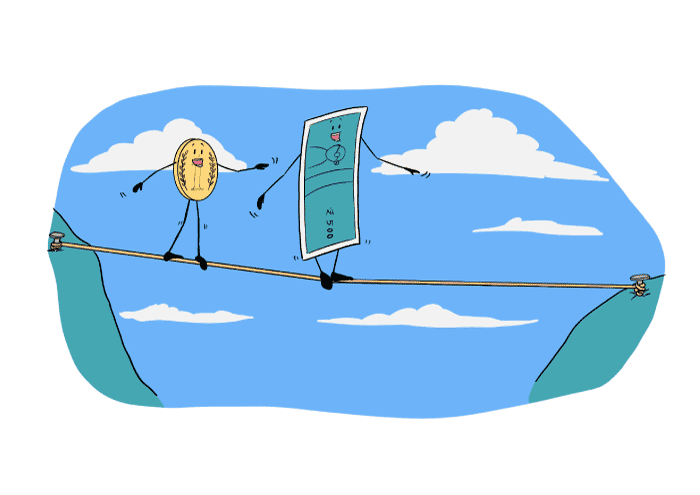 Surely, you’re no stranger to risk. None of us are, isn’t it? Many everyday activities involve some degree of risk. Crossing the road, driving uphill, climbing on a stool to retrieve some items from an overhead cabinet, and even children playing in the local park - they’re all activities that carry different risks. There’s the risk of accidents, injury, and more. As a matter of fact, there are very few activities in life that carry no risk whatsoever.

Unfortunately, investing isn’t one of them. Investing in any asset comes with some degree of risk. What is this risk, though? Let’s look at an example before getting into the technical details.

Risk in investing: An example

Let’s tell you the story of two traders - Varun and Tarun. The story begins with Varun. At the end of FY 20, he received a bonus at work. And since he did not have any immediate need for that money, he decided to invest it in equity.

Now, there was a problem here. While the stock price had been Rs. 105 when Varun had invested, it was now only Rs. 93. Initially, he had planned to sell his investments after the first quarter. But owing to the emergency, he was forced to disinvest, earning only Rs. 9,300 (Rs. 93 x 100 shares).

So, what was Varun’s loss? Well, he lost around Rs. 1,200 as a result of this transaction.

Now, let’s look at the trade executed by another investor - Tarun. On the same day Varun sold his shares at a loss, Tarun purchased those 100 shares of Tata Power at Rs. 93 each. Of course, this transaction occurred via an exchange, and neither Varun nor Tarun knew the other party.

The moral of this story is that on every transaction, one party gains, while the other loses. Varun’s risk is that he lost Rs. 1,200 of the money he invested. Tarun, on the other hand, did not experience such a predicament. This principle forms the basis for the concept of risk in any investment. The risk may or may not play out in reality, but it always exists.

Let’s check out the risk definition. In finance and investing, risk is the probability that the actual returns experienced by the investor will differ from the expected returns. It signifies the chance of losing some portion of the investment, or in some cases, even all of it. From this definition, it is clear that risk and return are inherently connected.

Let’s briefly explore the concept of expected returns before we delve further into risk. After all, the two are interlinked significantly. So, what are expected returns? Simply put, they are the returns that you expect from an investment. To explain this further, let’s take up two scenarios.

In this case, what are the expected returns from your portfolio?

You can see that it is neither 20%, nor 10%. Then, how do you figure out the returns from the portfolio?

You can use this formula to calculate it.

So, in this case, the expected returns would be:

Now, coming back to risk again, there’s one very fundamental question. Is risk inherent to a particular asset? Or is it something that is linked to the market as a whole? To understand that, let’s take the example of a motorcycle.

Driving a motorcycle carries with it the risk of the rider getting into an accident. You’ll agree, isn’t it? This type of risk is broad-market - meaning that it applies to all motorcycles. Now, when we zoom in and look at the different types of motorcycles, we can classify them based on many parameters. One such parameter is the presence (or absence) of an Anti-lock Braking System (ABS). The motorcycles with ABS have a far less risk of skidding than those without ABS. So, this is a kind of risk that is specific to motorcycles without an ABS.

Let’s break down each of these concepts one after the other.

Systematic risk is the probability of a loss that is associated with the entire market or market segment. It is a risk that is linked with a market, as a whole. For example, investing in the stock market - as a broad category - carries its own risk. Similarly, the bond market also has its own set of risks. This is what’s referred to as systematic risk, and it is generally external to the asset that you’re investing in. So, it is also not within your control, and therefore, cannot be avoided as such.

The differences between systematic and unsystematic risk

So, this gives you a basic introduction to risk. But how is it measured? That’s what we’ll be looking at in the next chapter. Head over there to understand how risk impacts your portfolio, and how you can quantify the risk for a stock and for a portfolio as a whole.

Risk and your portfolio

Hey, I have discovered this amazing financial learning platform called Smart Money and am reading this chapter on What is risk?. You can explore too.