Share
Chapter 2 / 5
1. At what age should you begin investing?

Gold and Real Estate today 4. Evolution of equity based investments

Equity investing for beginners 5. Investments lessons from your parents 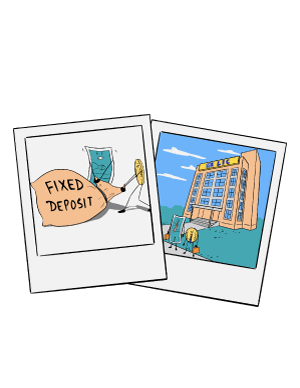 If you ask your parents what their preferred investments were, fixed deposits will undoubtedly be among the top 5. So will LIC policies. Well, you can’t blame them. When they were at the peak of their careers, fixed deposits were both safe and rewarding. And LIC was the undisputed king of the insurance sector.

No wonder FDs and LIC were considered among the best places to invest money. To this day, despite the many other investment plans in India, FDs and LIC remain a hot favorite. In this chapter, we’ll take a good look at the interesting details about these investments.

During the early 1990s, fixed deposits offered up interest rates as high as 13%. Hard to believe, right? Especially considering how FD rates offered by most banks today fluctuate in the below 5% range.

Over the years, there have been three key turning points for FDs in India - during the years 1985, 1992 and 1997. They each brought their own new regulations to the table.

1985: When the ceiling on FD rates was removed

Conventionally, for deposits with tenures ranging between 15 days and a year, banks were free to set their FD rates. There was just one condition. The ceiling on FD rates for such deposits was set at 8% per annum. In 1985, however, this ceiling was removed.

1992: Deregulation of FDs, and the start of the golden years

In 1992, FDs underwent their first round of deregulation. Banks were no longer required to fix the interest rates based on the maturity of the fixed deposits. And that’s not all. They were also free to offer interest at rates up to 13% per annum, for FDs with tenures above 46 days. No wonder you parents loved FDs!

In October of 1997, fixed deposits were completely deregulated. It was from this point that the RBI decided not to link bank rates with FD rates. Commercial banks were given the freedom to fix their own interest rates and determine the penalties on premature withdrawals. Today, this is pretty much how the scenario remains.

So, why are FDs among India’s favorite financial instruments anyway?

Ever wondered why FDs remain among the top investment options in India? Let’s check out some of the reasons India finds FDs so attractive.

FDs offer guaranteed returns, and this reduces the risk associated with the investment greatly.

Today, most banks generally offer a higher rate of interest on FDs for senior citizens. The difference may be nominal - often only a margin of 0.5% - but it’s an added benefit, nevertheless.

Investing in FDs is easy. It doesn’t involve a ton of research like some other investment options, such as real estate or equity.

Fixed deposits can also be customized. Investors can choose their deposit tenure. And premature withdrawals are also always permitted, except in the case of tax-saving FDs.

Life insurance as we know it today was a concept India borrowed from England. Oriental Life Insurance Company, set up by Europeans in Calcutta in 1818, was India’s first life insurance provider. But over a century later, in the 1950s, the Life Insurance Corporation of India (LIC) was created.

However, it was only much later that life insurance in India suddenly took centerstage. In 1995, LIC started an online drive for assisting policyholders and empowering agents through computers. And then, in 2000, the insurance sector was liberalized, thanks to the IRDA Bill.

Why are LIC policies among India’s favorite financial instruments?

Even as these developments continued on the one side, to the average Indian, LIC represents an iron-clad protection against emergencies. Here are some reasons LIC’s life insurance policies have been a favorite in India.

The fact that all life insurance plans (except term insurance) offer both insurance and savings/investment components.

Wrapping up: FD vs. LIC

Is the FD vs. LIC dilemma on your mind? Why not set aside a part of your income for both these options? After all, they are quite different in essence. An FD gives you guaranteed income if you need regular payouts, while LIC’s life insurance protects your family in case of any untoward happenings. And that not only resolves your FD vs. LIC question, but it’s also a win-win situation!

The magic of compounding

1.Is there an upper limit on the amount of FD investment?

No, there is no specific upper limit on the amount you can invest in FDs. However, banks offer varying rates of interest based on the amount and the period of the deposit. So, make sure you check out the rates before investing, so you can optimize your returns.

2.What kind of insurance plan should I buy?

That depends entirely on your life goals and your requirements. If you only want life insurance coverage, a term plan may be the best choice. If you want to save up for the long term, endowment plans may be what you’re looking for. ULIPs, on the other hand, help you invest and insure your future.

3.Can FDs help me save tax?

Yes, FDs can help you save tax. For this, there is a special kind of FD, known as tax-saver FD, that you will have to invest in. These FDs come with a lock-in period of 5 years, and they offer tax benefits up to Rs. 1.5 lakhs, under section 80C of the Income Tax Act, 1961.

Hey, I have discovered this amazing financial learning platform called Smart Money and am reading this chapter on India's favorite financial instruments: FDs and LIC. You can explore too.